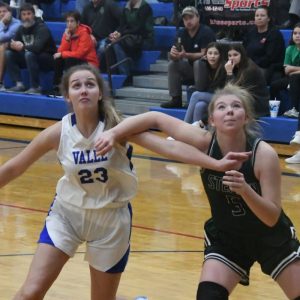 Valle Catholic’s Bri Hibbits (left) and Kylee Clayton from Ste. Genevieve battle for a rebound during the Valle Catholic girls’ basketball tournament earlier this season. The Warriors and Dragons play each other in varsity action at 3:30 p.m. this Saturday. (FILE PHOTO BY ERIC VICCARO/Herald staff)

A winter storm on Thursday postponed the only games of the week for both the Dragons and Warriors.

“The rematch with Ste. Genevieve scares me,” Bauman said. “Disregard their record, especially for this rivalry game. They’re going to give us everything they’ve got.”

“Our girls think Ste. Genevieve was able to take us out of our game plan some the first game,” Bauman noted. “So, it’ll be interesting to see how we counter them this time around.”

Ste. Genevieve (1-10) will compete twice this week, on Jan. 13 versus Mineral Area Activities Association Large School foe Fredericktown and then at Valle Catholic.

“We are looking forward to our rematches versus Fredericktown and Valle,” said Ste. Genevieve head coach Jordanna Walk-Robison. “Valle is having a good season, and they have girls that get after it.”

Both Bauman and Walk-Robison lamented not playing last week.

“It is what it is, unfortunately,” Walk-Robison commented. “It was nice to get some quality practices in last week, and focus on what we need to be doing better as a team. I feel like we had our best consecutive practices so far this year.”

“We had some extra days off over the Christmas holidays,” he said. “So, last week’s practices gave us a chance to get our feet back under us again, and review much needed areas of concern.”

The Ste. Genevieve-Valle Catholic “Old Settlement Showdown” will begin at 1 p.m. with varsity, and then two quarters of junior varsity to follow — this is different than information found in the Jan. 12 edition of the Ste. Genevieve Herald.