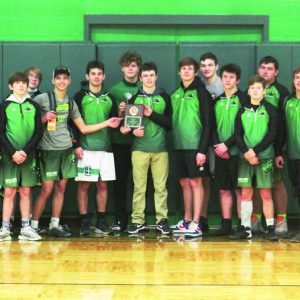 The Ste. Genevieve High School boys’ wrestling team won its own dual tournament last year, and the Dragons are aiming to do the same in 2022. Ste. Genevieve, because of illness, hasn’t participated in a varsity meet since Dec. 11 at Union. (FILE PHOTO BY ERIC VICCARO/Herald staff)

The tournament also will feature Valle Catholic, Dexter, Windsor, Mehlville and Owensville in what shapes up to be a competitive field.

“We love being able to wrestle at home, and anytime you can showcase your school and community, it’s a bonus,” Bonnell said.

Bonnell said there will be several exciting match-ups throughout the day with several state-ranked wrestlers meeting in head-to-head matches.

So, why a dual-team formatted tournament?

“It optimizes our chances for kids getting the maximum matches allowed per day,” Bonnell said. “I also think a dual tournament brings a special kind of excitement.”

“It’s a nice tournament since it’s close to home,” Gegg said. “We don’t have to wake up extra early, or stay in a hotel. We usually have a good crowd come out and support us since it’s in our hometown.”

The tournament also serves as a boon for the town’s economy during one of the slowest times of the year — the holiday hangover.

Ste. Genevieve won last year’s event, and the Drag ons will figure in the mix to win it again. Valle Catholic, fielding a more complete roster this year, also has a chance to win one of the plaques for the top-two squads.

The day begins with weigh-ins at 8 a.m. in the gymnasium. Wrestlers must make scratch weight unless he was in a dual match the night before. Scales will open at 7:30 a.m., with matches beginning at 9:30 a.m.

(See the schedule accompanying this story.)

Both the Dragons and Warriors will be shaking off rust. Ste. Genevieve’s varsity hasn’t competed since the Union Tournament on Dec. 11, 2021. Valle Catholic’s last action was at the Battle at Katy Trail in Sedalia on Dec. 18-19, 2021.

In other matches set for the week, Hillsboro visits Ste. Genevieve on Wednesday and Valle Catholic will play host to a triangular with Maplewood and Hancock on Thursday.

“These are two district opponents that we wanted to see prior to the district tournament,” Gegg said. “We wanted to get matches to help with seeding.”