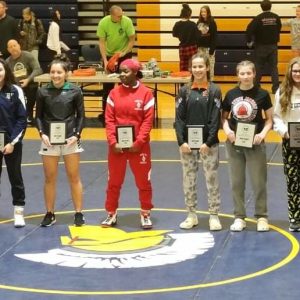 And Basler had a fine tournament for herself, finishing sixth in the 125-pound weight class.

“We are very proud of Izzy,” Ste. Genevieve head coach Jared Bonnell said. “I know she would have liked to do better, because she is extremely competitive and often is her own biggest critic.”

Bonnell said Basler placing where she did — in only her third year wrestling — was an “outstanding achievement.”

There was a field of 48 wrestlers in Basler’s weight class alone for this massive tournament, which took place at Muriel Battle High School over a two-day period.

Basler opened up with a 45-second pin over Shae Nortrup from Fort Zumwalt South, and she followed that with a 12-4 major decision over Kaylin Homfeld of Lindbergh.

Reaching the quarterfinal round, Basler continued her winning ways with a thrilling 6-5 decision over Taryn Johnson from Park Hill (a Kansas City area school).

Basler lost her final three matches to wrestlers from schools with much larger enrollments; but, she still had a fine tournament.

Johnson returned the favor in the fifth-place match, beating Basler on a 6-5 decision. Brenya Crahan of Nixa pinned Basler at the 2:49 mark of the semifinal match. Alexis Dunwiddie from Jefferson City recorded a 10-2 decision over Basler.

Basler scored nearly half of the Dragons points at the event.

“Paityn had a nice tournament, missing the medals by one match,” Bonnell explained. “She is starting to figure it out, and I could see her making some noise as the season moves on.”

However, that’s when Paityn ran into a road block, losing to Lafayette’s Faith Cole (fall, 2:22), in the quarterfinals and then Addison Kremme (Odessa) in the consolation round (fall, 3:04).

Katlynn Lay and Addison Geiler both won one match each in the 130- and 141-pound weight divisions, respectively.

Lay pinned Emily Croy of Marshfield in 3:16 while Geiler recorded a 19-4 technical fall over Plattsburg’s Bristol Robinson — the match stopped at the 5:25 mark.

Bonnell said the Wonder Woman was a great experience for all the girls, seeing the best Missouri has to offer in each weight class.

“I believe that seeing this type of tournament, and competition, will help our girls in the big tournaments at the end of the season,” Bonnell said.

The Dragons learned valuable lessons during the event. The field featured 79 high schools, including ones from Illinois, Arkansas and two powerhouses from Oklahoma in Jay and Broken Arrow.

Ste. Genevieve will be competing in the Central Rebel Invitational on Saturday at the Foulon Field House in Park Hills. Matches will start mid-morning.