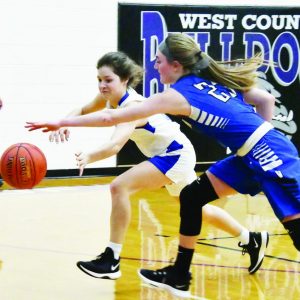 For their hard work and diligence, the Weilers were named to the FSCB all-tournament team.

“For the tournament, Ade was third on our team in scoring, tied for first in rebounds, first in assists and second in steals,” Valle Catholic head coach Brian Bauman said. “Mia was first in scoring and first in steals.”

“I think we took sixth in last year’s tourney, so for us to lose out top-two scorers and rebounds, and finish third this year is a huge accomplishment for our girls,” Bauman said.

Perryville defeated Valle Catholic in the tournament semifinals, 45-39, which sent the Warriors to the third-place game.

The Pirates bolted out to a double-digit lead, and Valle Catholic kept chipping away — but couldn’t get any closer than a four-point deficit.

Valle Catholic opened tournament play with a 438-38 victory over Viburnum, a team that featured many girls around the same height (5-foot, 8-inches).

“We had to rely heavily on our defense to keep us in the games,” Bauman said. “I thought for us to shoot poorly, and still be able to win a couple games says something for our girls this year.”

In the end, Valle Catholic ended up playing three of the top-6 teams in the tournament.

Ella Bertram and Ade Weiler both contributed four steals. Ade Weiler also dished off a team-leading four assists and grabbed a Warrior-best eight rebounds (including four caroms on the offensive glass). Brooklyn Weibrecht and Bertram both had two blocked shots.

The Warriors had the daunting task of playing against Madison Nelson, who dropped in 34 points, including four 3-pointers. During the tournament, Nelson scored her career 2,000th point.

“Madison is talented, smooth and under control handling the ball,” Bauman said. “She’s just a pure shooter in general.”

Valle Catholic had a 28-16 lead at intermission, and the Warriors were up 39-29 after three periods before hanging on to win.

Valle Catholic (7-3) travels to Chaffee for a game this Thursday, Jan. 6, with the Warriors’ next home game set for next Monday, Jan. 10, with parochial rival St. Vincent.