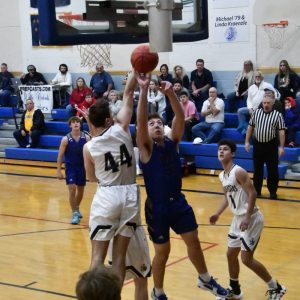 Saxony Lutheran ran a pair of zone defenses that stymied Valle Catholic in the third-place game, and the Crusaders overwhelmed the Warriors 62-20 before a stunned crowd.

“Saxony made it very difficult on us,” said Valle Catholic head coach Tyler Search. “I really don’t think we came ready to play. Maybe we were still thinking about the night before.

“They used some different zone looks (including a stifling 1-3-1 alignment) and their length is impressive,” Search added.

The Jaguars shot “lights out” while the Warriors were 11-of-30 from the free-throw line, which relegated the Warriors to the third-place game.

Although the Warriors showed flashes of brilliance during the event, they never really put a full game together.

Saxony Lutheran’s Wilson Lodge paced all scorers with 21 points, including 10 field goals. William Eldridge also scored in double figures for the Crusaders with 11.

Aiden Heberlie and Clayton Drury scored five points apiece, with Clayton 3-of-4 from the foul line. The Warriors were 6-of-17 from the stripe, an area of concern moving forward.

Valle Catholic was limited to three points in the first half, all on a traditional 3-point play from Eli Fallert.

Saxony Lutheran took control of the game in the second quarter, outscoring Valle Catholic 24-9 with a 33-12 lead.

The Warriors played without Harry Oliver and Sam Drury, the latter who still has yet to make his season debut.

Valle Catholic opened the tournament with a slim 65-62 victory over St. Vincent, with Chase Fallert dropping in a team-best 25 points (including two 3-pointers and 11-of-17 from the line).

Harry Oliver played his best game of the season with 15 points, including seven field goals. Tucker chipped in with 11.

Both Chase Fallert and Carson Tucker were named to the Warrior Winter Classic all-tournament team. Look for the

Valle Catholic has a busy week ahead, with games against Bismarck tonight and at West County Friday.