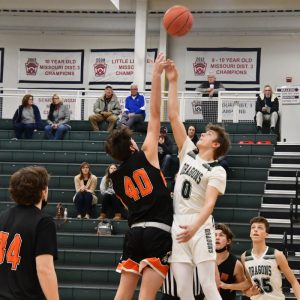 PARK HILLS — The Ste. Genevieve High School boys’ basketball team bowed out of the Sechrest Christmas Tournament with a 59-50 loss to Hillsboro in a fifth-place semifinal elimination consolation.

The Dragons stood at 7-4 heading into Tuesday’s home game against West County. Ste. Genevieve also has a date with Farmington Friday on the road.

In the game against Hillsboro, Ste. Genevieve established a 17-12 lead at halftime — only to see Hillsboro forge ahead 30-25 at intermission.

The Dragons closed within three (43-40) after three periods, but Hillsboro outscored Ste. Genevieve 16-10 in the final quarter to win.

“We were hoping to play four games,” Ste. Genevieve head coach Robert Coleman said. “It was a tough tournament with a lot of good teams. We feel like we are right there and can play with any of those teams.”

Coleman said the difference between winning and losing boiled down to simple execution.

The tournament was a challenge with games back-to-back-to-back days, and there wasn’t much time to prepare for different teams.

Fredericktown has length and the Blackcats preferring playing zone defense. Festus enjoys playing an up-tempo style with a smooth-flowing transition game. Hillsboro shows an opponent everything, but the kitchen sink.

During the tournament quarterfinals, Festus defeated Ste. Genevieve 67-65 in what proved to be a taut contest. The Tigers were up 53-52 at the end of three quarters.

Ricky Hunter netted 19 points, followed by 14 from Thomas O’Brien and 11 from Blake Morganthaler.

Ste. Genevieve opened the tournament with a 54-33 victory over Fredericktown. The Dragons were the sixth seed.

In the loss to Hillsboro, Aiden Boyer had a double-double with 10 points and 10 rebounds. He also had five assists, tying with Ricky Hunter for top honors in this statistical category.

Flieg netted a team-best 21 points and had seven rebounds while Ricky Hunter added 15 points — including three 3-pointers — and five assists.

Coleman said the tournament will help the Dragons prepare for the upcoming Mineral Area Activities Association schedule — and the playoffs in February.

This marked the Panthers third consecutive title and ninth overall.