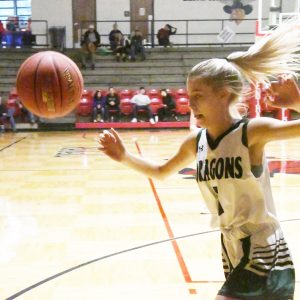 However, the Blackcats outscored the Dragons 18-8 in the fourth quarter, pulling away for a 48-32 victory in an elimination consolation game at the 66th Annual Sechrest Holiday Tournament on Tuesday, Dec. 28, at Foulon Field House.

“It was nice for the younger girls to get quite a bit of varsity game experience,” said Ste. Genevieve head coach Jordanna Walk-Robison. “It will help them in the long run.”

Fredericktown’s Kyndal Dodd was the game’s top performer with 22 points, including 6-of-9 from the free-throw line.

In other statistical categories, Regean Naeger dished off four assists and Kayden Huck two. Byington and Greminger both had two steals. Turnovers continue to be a concern for the team; the Dragons had 25 of them.

Host Park Hills Central downed Ste. Genevieve in an opening-round game on Monday, Dec. 27, which relegated the Dragons to the consolation bracket.

On Friday evening, South Iron stopped Steelville 62-48 for the tournament championship. Madison Ayers netted a team-best 21 points while Anna Parker and Enzley Dinkins chipped in with 13 each. This was the Panther girls first title.

The Dragons will get another crack at Fredericktown on Thursday, Jan. 13, at home.

But first, Ste. Genevieve travels to Imperial for a game with Seckman this Friday. Varsity tip-off should be close to 7:30 p.m.

Walk-Robison reported the Dragons have added two games to the schedule, versus DeSoto and Jefferson R-7. Read next week’s Herald for exact dates and times.