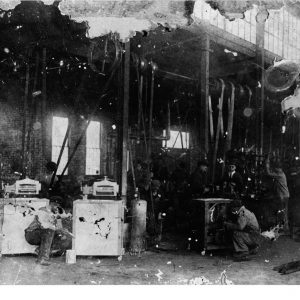 Workers pose in the washing machine factory that opened in December 1921 in what later became the Kisco Boiler & Engineering factory on North Main Street Kelly Jett, who provided the photo, hoped readers might identify the men. (Photo courtesy of Kelly Jett/Special to the Herald)

Not long ago, Kelly Jett brought in the photograph pictured here, of the interior of the local washing machine factory that opened in December 1921.

It had been mentioned in the “Looking Back” column from 100 years ago.

“The installation of more machinery, line-shafting, etc., at the washmachine factory was in progress this week, and preparations are going steadily on to begin the manufacture of washmachines during the next month,” the Dec. 1921 Herald had stated. 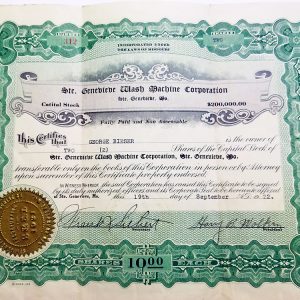 Jett wondered if any readers could identify any of the men pictured. So far, no one has.

It has, however, drawn some responses. 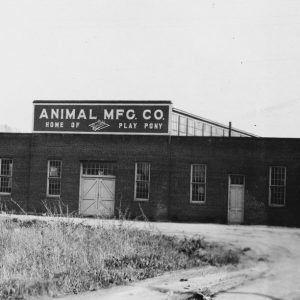 The building as the Animal Manufacturing Company.

Charlotte Bahr sent a photo of an original stock certificate for the Ste. Genevieve Wash Machine Corporation, from 1922. Frank X. Siebert is listed as secretary and Harry A. Wolkan as president.

Jett had also noted that the building, which still stands on North Main Street, later became the Kisco Boiler & Engineering plant and was owned by her grandfather, Stanley Jett. She also brought later photos of the building.

Local historian Bob Mueller has since noted that at one point in its history this building had a third life.

In between the washing machine factory and Kisco, it housed the Animal Manufacturing Company.

Anyone else with information on the washing machine factory, the Animal Manufacturing Company, etc., is encouraged to stop by the Herald or call 573-883-2222.