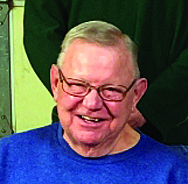 Visitation was at Basler Funeral Home in Sainte Genevieve, MO on Sunday, January 2, 2022 and Monday, January 3, 2022.

Burial was at Valle Spring Cemetery

James enjoyed lovingly harassing his Grandchildren and being a jokester. He was an avid traveler and visited 49 states. James was a loving husband and father and will be greatly missed.