Ste. Genevieve County commissioners and road and bridge personnel cleaned junk and trash off of the county fairgrounds last Friday.

The work was done just after the ninth and final member of the new fair board was named. 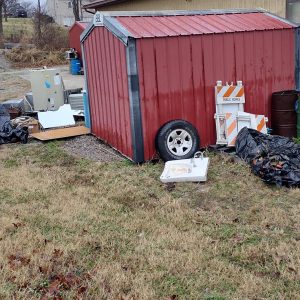 Before and after shots at the county fairgrounds. The county and and bridge crew, along with commissioners Garry Nelson and Karen Stuppy, removed everything – including the kitchen sink. (Photos courtesy of Karen Stuppy/Special to the Herald) 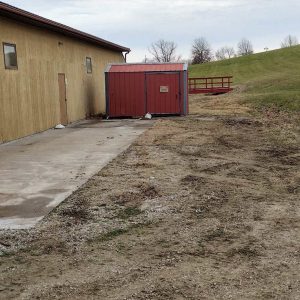 “We don’t want to turn a costly mess over to them,” Presiding Commissioner Garry Nelson said.

Meanwhile, the commissioners plugged the final gap with a selection that pleased them considerably.

There is also a dip that fills with water after heavy rains that needs attention, plus the road needs grading.

Felix Meyer, the county emergency management director, submitted a letter requesting appointment to the board. They were quick to make the appointment.

A reorganizational meeting will be held and the members will need to be sworn in, by state statute.

Scott Schmieder, road and bridge foreman, and some of his men, have also helped in clearing old furniture and built-in items from the upstairs courtroom at the courthouse.

County Circuit Clerk Julie Bova had words of praise for them.

“My anxiety level was high” prior to the start of the work,” she told the commissioners and Schmieder, but said that he and his men were great to work with.

“They had the patience of saints,” she said, joking that, “They had eight women and one judge bossing them around.”

It was also agreed that two individuals assigned to do community service by Prosecuting Attorney Wayne Williams had also been big helps in the work.

The courtroom is being totally remodeled.

Schmieder, meanwhile, reported that equipment is running well, other than issues with the Caterpillar skid steer.

The machine, bought in December 2017 for $64,692, continues to have DEF (Diesel Exhaust Fluid), a liquid used to reduce pollution created by diesel engine, includes urea and deionized water. It frequently causes the engine to shut down. Personnel from  Fabick Cat of Fenton have made several trips down to work on it under warranty.

The question was raised as to how much longer the warranty runs. Schmieder said it was a five-year warranty and that he assumes it will run through December 2022.

“If we have to service it, we need to think about how much it would cost after the warranty expires,” Nelson said.

With a possible winter storm moving in over the New Year’s weekend, Schmieder reported that his crew was ready in case ice or snow hit. Spreaders were being put on trucks that day, he said.