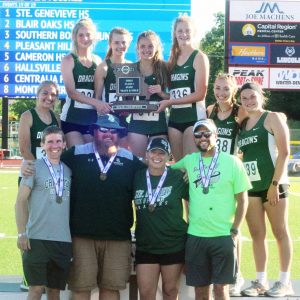 The Ste. Genevieve High School girls’ track and field team earned the Class 3 state championship by one point over Blair Oaks, 38-37, in May at Adkins Stadium in Jefferson City. (Photo by Eric Viccaro/Herald staff) 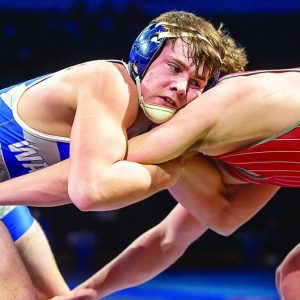 Valle Catholic High School’s Josh Bieser reached the Class 1 state championship bout at 145 pounds before bowing out, earning the Warriors their first-ever medal on this level. (Photo by David M. Rainey/Cable Dahmer Arena/Special to the Herald)

In the year 2020, the COVID-19 (coronavirus) pandemic took center stage in all of our lives, from quarantine to senseless lockdowns and canceled games.

This year as people stripped their faces of masks, exercised their personal freedom to get the vaccine — or not — and others gained confidence through natural immunity, the virus lessened as a part of our lives, even with Delta and Omicron variants present.

Sports were back in the spotlight, and many local athletes took advantage of it.

Several Stingray swimmers competed at the AAU Junior Olympic meet in Houston, with Elizabeth Sulser grabbing many medals along the way.

In fact, the Stingrays played host to their first swim meet since the 1970s when current Ste. Genevieve Park and Recreation Board member Barbara Basler-Peterson served as the head coach — which was under consideration to make the list of top sports stories of the year in this edition of the Ste. Genevieve Herald.

Both the 12-under and 16-under Fury teams competed in the National Softball Association national tournaments.

The American Legion freshman squad qualified for the state tournament, and the RiverDogs’ youth baseball program continued its fine development. The same could be said for Ste. Genevieve’s Natural Disasters volleyball program.

However, after the dust settled, the sports editor opted to name the following as the top-12 sports stories of the year.

And, the top-two stories have been broken down by top individual and top team accomplishment.

Valle Catholic senior wrestler, back as a junior, wrote history becoming the first-ever Warrior to medal at the state tournament.

The Ste. Genevieve 4×400-meter quartet of seniors Marysa Flieg, Brynna Wehner, Maci Reynolds and Megan Aubuchon finished eighth in the event with a time of 4 minutes, 18.86 seconds — which was six tenths of a second faster than Trenton.

That eighth-place finish catapulted the Dragons to a one-point victory over Blair Oaks for the Class title, 38-37, at Adkins Stadium in Jefferson City.

Flieg, Aubuchon, Reynolds and Wehner also provided leadership for the next generation.

Others also impacted the success of the Dragons, including throwers Etta Heller, Maggie Myracle and Lana Kemper and state alternates Karissa Holst and Alison Braun.

“I couldn’t think of a more deserving kid to go out and be our first state medalist,” Valle Catholic head coach Jacob Gegg said in a Herald story from March 17.

Bieser reached the championship round, complete with a promenade-of-champions spotlight and formal public address introduction. However, Lawson’s Tyler Leonard stopped Bieser in 5:19, using his lanky body to earn a 22-7 technical fall. In other accomplishments during the 2020-21 season, Bieser earned both conference and district championships.

He established single-season records for victories (37) and pins (26), coming off being a state qualifier as a sophomore.

Bieser has bumped up from 145 to 152 this year, and he’s off to a tremendous start with a 19-2 record, claiming the John Burroughs title and he was fourth at the Battle at Katy Trail.