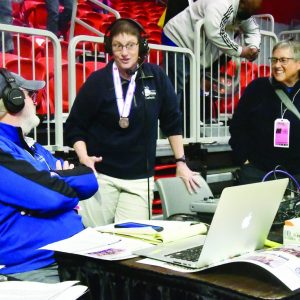 OTHER TOP STORIES OF THE YEAR

Ste. Genevieve and Valle Catholic football square off in playoffs — For the first time ever, the Dragons and Warriors squared off in a playoff game. With Valle Catholic elevated to Class 3, thanks to the Missouri State High School Activities Association, the schools also were placed in the same district. In a high-octane affair, the Warriors outlasted the Dragons 69-35 in front of more than 2,000 fans at Father Dempsey Field. Valle’s Bryce Giesler scored six TD and Ste. Genevieve’s Zach Boyer rushed for 161 yards.

Valle Catholic volleyball finishes third at state — Nancy Fischer continued her coaching brilliance, guiding the Warriors to third place in the Class 3 state tournament — beating Notre Dame de Sion 25-22, 25-14, 25-15. Along the way this season, Fischer picked up her 800th career coaching victory, only the third to reach that milestone. Ella Bertram and Hailey Weibrecht signed NLI’s to play at the junior college level.

Aiden Heberlie officially signs with Mizzou — Heberlie made it official in mid-November, signing a National Letter of Intent to join the baseball team at Missouri, which plays in the premier NCAA Division I Southeastern Conference. Heberlie will play outfield for the Tigers, recruited for his speed and athleticism. He finished with eye-popping scholastic numbers (47-of-47 on steals, 44 runs, 48 hits and 37 RBI).

Runner Taylor Werner turns professional — The former Ste. Genevieve High state champion and University of Arkansas standout, Werner opted to turn professional this year, running for Puma. Werner finished short of making the Olympics at this year’s trials. However, she still won the USA Track and Field women’s six-kilometer championship in Canton, Ohio, in July, clocking in with a time of 18:21.

A trio of medals at the state cross country meet — Junior Peter Roth produced the best placement among a trio of medalists at the state cross country, fifth in the Class 1 boys’ race in a personal-best time of 17:04.3. Ste. Genevieve’s Nathan St. Clair ran faster with a career-best 16:50, however he was 19th in Class 3. Valle freshman Madelyn Griffard rounded out the medal winners in Class 2 girls (20:57.2, 22nd place).

Valle Catholic boys’ finish third in Class 2 at state track and field — The Warrior 4x-100 relay team of Luke McClure, Sam Drury, Bryce Giesler and Cory Stoll rolled to a second-place finish in a school-record time of 44.45. The Warriors were also fourth in the 4×400 (Braden Coleman, Mitchell Meyer, Josef Flieg and McClure), and the Warriors placed third in Class 1.

Isabel Basler reaches state girls’ wrestling quarterfinals — Later in the year named the Homecoming queen, Basler reached the state semifinals before settling for a fourth-place finish at 127 pounds. She compiled a 29-8 individual record, and has bumped up to 130 pounds this season as part of a nationwide weight adjustment.

Valle Catholic boys’ basketball reaches state quarterfinals — In front of a standing-room only crowd in early March, Campbell topped the Warriors 68-61 in the Class 2 quarterfinals. Dynamic Carter Hoog tallied 30 points in the loss.

A changing of the guard for Ste. Genevieve softball — Russell Toombs opted to retire from coaching at the end of the season, and former NCAA Division I softball player Becky Keim, already an art instructor in the district, was hired. Keim was a standout infielder at Southern Illinois University in the 2000s.