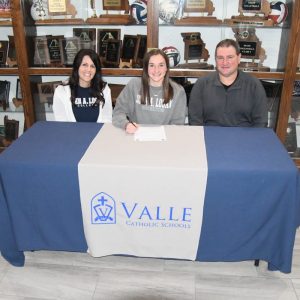 Valle Catholic senior middle blocker Hailey Weibrecht became the third volleyball player in the county to sign with a junior college last Wednesday, Dec. 22, joining the program at John A. Logan in Illinois. She is shown here with parents Nichole and Brian Weibrecht. (PHOTO BY ERIC VICCARO/Herald staff)

Weibrecht signed her National Letter of Intent to join the team at John A. Logan College located across the bridge in Illinois.

The Volunteers finished the 2021 season with a 15-12 overall record, and 10-4 in the Great Rivers Athletic Conference.

John A. Logan reached the Region 24 Division I championship before falling to Vincennes (Ind.) in four sets.

The Volunteers qualified for the NJCAA Midwest District Tournament; however, they were swept by Indian Hills Community College (Iowa).

“What made John A. Logan the choice for me was that it felt like home right when I walked through the doors,” Weibrecht said. “The campus had everything I was looking for. They have great academics, a great program and everyone was very welcoming.”

Weibrecht will be joining former Valle Catholic volleyball player Riley Siebert on the squad, and Siebert was in attendance at Hailey’s signing — along with Volunteers’ head coach Bill Burnside.

Weibrecht said although she was looking at other colleges, John A. Logan presented the perfect fit.

This season, Weibrecht was a key cog for Valle Catholic, helping the Warriors to a 32-5-3 record and third-place finish at the Class 3 Missouri State High School Activities Association tournament.

“My senior year as a Lady Warrior meant a lot to me,” Weibrecht said. “My main goal was to enjoy every minute on the court, and work my hardest to get a chance at a state title. I was so excited to get to play at another state championship, and to have a great team around me while accomplishing the third-place title.”

Weibrecht was proud of her accomplishments, which included being a varsity member of the Warriors all four years. She enjoyed the “loud crowd” and all the memories being part of the team.

Weibrecht describes herself as a well-rounded player.

She pounded down 267 kills and recorded a .234 hitting efficiency during the 2021 seasons.

“I am always up for a challenge, and love to be pushed past my limits,” said the middle blocker. “I think coach Burnside saw that I was open to trying new things, and I am willing to do anything to improve my athletic skills at the next level.”

For Weibrecht, the best part may be the reunion with Siebert.

“It means a lot to me to be able to be back on the court with Riley,” she said. “Riley and I pushed each other to be our best at Valle, and I’m excited to have her by my side pushing me (again).”

Siebert posted 68 kills, 31 digs and 16 solo and assisted ace blocks combined for the Volunteers as a freshman.

Hailey Weibrecht, the daughter of Brian and Nichole Weibrecht, plans on studying exercise science and nutrition at John A. Logan.

John A. Logan is a public community college in Carterville, Ill., with 4,424 full- and part-time students combined.

All three young women who have signed with junior colleges are middle blockers.