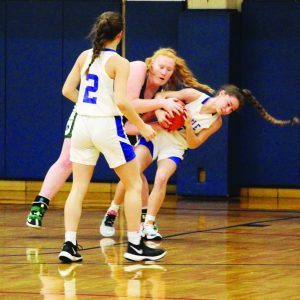 Valle Catholic’s Mia Weiler (13) tussles for possession with a Perryville player during a girls’ basketball game from Monday, Dec. 20. Valle defeated Perryville, 37-29. (PHOTO BY JENNIFER BIESER/Special to the Herald)

“I actually consider that more than just a bounce-back win for us,” Valle Catholic head coach Brian Bauman said. “The way we’ve been playing gave me reason to believe we could hang with Perryville. The girls continue to raise, what our coaching staff sees as, their ceiling. And that’s exciting.”

Bauman liked that the Warriors’ post players controlled the boards to the tune of 23 rebounds, 10 caroms on the offensive glass alone. Bertram grabbed 12 rebounds and Samantha Loida and Emma Christine 10 each.

Overall, the Warriors finished the game with 41 rebounds.

Loida also was Valle Catholic’s top scorer in the game with 14 points, including one 3-pointer and 3-of-5 from the free-throw line. Ade Weiler contributed nine points on four field goals and one foul shot.

In other superlatives from the game, Ade Weiler swiped six steals with Mia Weiler and Bertram three apiece. Mia Weiler had two assists and Bertram also chipped in with three blocked shots.

The second quarter proved to be the difference in the game, with Valle Catholic outscoring Perryville 12-5 for a 19-12 lead. The Warriors were up 28-18 after three, maintaining a comfortable cushion in the fourth period.

Valle Catholic also won a two-quarter JV contest 14-4; however, individual scorers were not reported to the Herald.

Valle Catholic (5-2) will compete in the First Community State Bank Tournament this week.

The Warriors are the No. 3 seed in the tournament, and they played the winner of Monday’s DeSoto/Viburnum game on Tuesday.