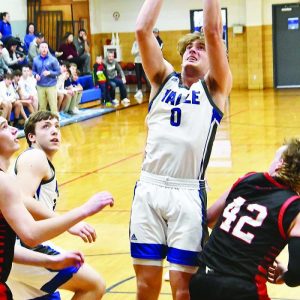 In the process, the Warriors evened their record at 3-3 heading into their own home holiday tournament this week.

Herculaneum’s Dylan Black made a layup inside giving the Blackcats a 26-11 lead with 6:12 remaining in the second quarter. It was Herculaneum’s third 15-point lead of the first half.

“Herculaneum came out ready to go, and we were not prepared for them in the first quarter,” Valle Catholic head coach Tyler Search said. “I thought we did a decent job on them defensively after the first (quarter). We were more focused after halftime.”

The Warriors spent the remainder of time playing a furious game of catch-up, and Chase Fallert’s 3-ball from the top of the key gave Valle Catholic a 46-43 lead with 1:14 left in the third.

As the game wore on, Valle Catholic’s defense became stingier — and both Aiden Heberlie and Fallert were at the center of those efforts. And the Warrior defense fueled a better transition game.

Fallert totaled 28 points, including four triples and a whopping 14-of-18 from the free-throw line. Heberlie added 26 points on nine field goals and 8-of-12 at the stripe.

Late in the third quarter, Fallert spotted Heberlie inside on a nifty give-and-go, and then Chase banked a 3-ball from 23 feet away on the wing.

And presto, Valle Catholic’s lead was 51-45 at the end of three. The Warriors outscored the Blackcats 28-15 during the period.

Herculaneum tried with might to respond. Dallin Fuller made a spinning shot in the lane to deadlock the score at 56-all with 3:41 left.

Herculaneum went up one, 59-58, on Jackson Dearing’s inside bucket one minute later.

But, Fallert and Heberlie canned critical free throws and Herculaneum misfired on several perimeter jumpers down the stretch.

“Chase and Aiden are both players that can take over games,” Search said. ”They both knew they didn’t want to lose that game. We talk about defending our home floor, and I think that mindset helped us secure the win.”

Valle Catholic drew the No. 5 seed for its own 12th Annual Winter Classic, playing rival St. Vincent at 7:30 p.m. on Tuesday evening.

“I think the second through sixth seeds are pretty even in our tournament,” Search said. “Seckman is a talented team, and is our No. 1 seed. It should be a very competitive game against St. Vincent, and I’m looking forward to it.”

Championship and consolation semifinals are set for today, with championship through seventh-place contests scheduled for tomorrow, Thursday.