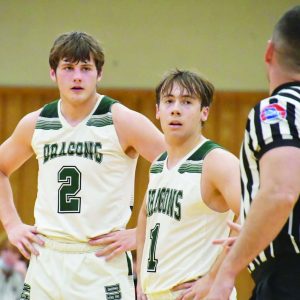 “Kingston is a very good team,” Ste. Genevieve head coach Robert Coleman said. “They have some good guard play, and the big kid inside did a great job of protecting the rim and made it tough on us to score.”

Nelson couldn’t get anything going on offense because the Dragon post players guarded him closely, and guards helped on the weak side.

Coleman said the Dragons’ transition game in the second half helped Ste. Genevieve expand its advantage into double figures.

The Dragons outscored the Cougars, 18-10, in the final period for the game’s final differential of 19 points.

Hunter also contributed four rebounds and three steals, and he adjusted to how the referees were officiating the game in the second half.

“Ricky came out in the first quarter, and hit a couple of 3’s,” Coleman explained. “In the second half, his defense was really good, which led to some easy buckets. He did a great job of attacking the basket in the half-court offense.”

Aiden Boyer chipped in with 11 rebounds, including five boards on the offensive glass, to go with two steals and two assists.

Kingston fell to 7-2 on the season. Despite that, the Cougars will be a tough team in the Mineral Area Activities Association’s Small School Division.