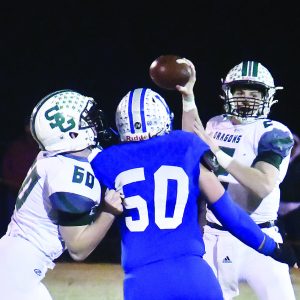 Ste. Genevieve’s Dalton McBride (60) attempts to block Valle Catholic’s Noah Elbert (50) while Dragon Aiden Boyer (2) passes during a Class 3 District 2 semifinal game between the Dragons and Warriors. All three of these football players were recently honored at the regional level by the Southeast Missouri Area Football Coaches Association. (PHOTO BY ERIC VICCARO/Herald staff)

These players are solid gold.

The city produced three first-team, all-state players, two more on the second team and one third-team selection — plus a heap of academic all-state and all-region picks.

“They (Bryce and Aiden) thrived off of how opposing teams were trying to defend us,” said Valle Catholic head coach Judd Naeger in an email to the Ste. Genevieve Herald on Nov. 22.

“Dale was a very good lineman for us this year,” Ste. Genevieve head coach Jay Pope said. “His improvements were the tangible things he provided the team this year. He was a tremendous leader and role model for the younger linemen.”

Dale helped classmate Zach Boyer turn in a decorated season as a second-team all-state wide receiver, with 1,523 all-purpose yards and a 1,000-yard plus season in receptions.

Valle Catholic’s Noah Elbert also turned in an outstanding season, and he was named a second-team all-state selection.

The Warriors accumulated 4,858 yards in total offense this season, including a whopping 3,649 yards on the ground.

Squires made the all-state team, in part, because opposing teams avoided linebacker Thomas O’Brien’s side of the defensive alignment, Pope said.

O’Brien was one of 10 Dragon selections on the all-region team released by the Southeast Missouri Area Football Coaches Association.

Football players must be nominated by their current head coach, who must be a current member of the MFCA. He must be a starter on offense or defense, or be a punter or kicker in 70 percent of the games, and be a sophomore, junior or senior in terms of academic status.

Players must possess a 3.5 grade-point average or higher and must rank in the top 20 percent of his class — with GPA and rank determined at the start of this academic year.

“Our offensive line played very well this year, and coach Joe Roth did an amazing job with these guys,” Naeger said.

Coaches are not allowed to vote for their own players on either the all-state or all-region teams.