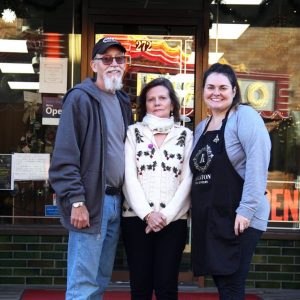 Gas was 57 cents a gallon, Gerald Ford was in the White House and Bob Gibson was still pitching for the Cardinals in 1975, when Tom and Sue Steiger started working at the jewelry store at 272 Merchant Street.

Harry “Quinton” Klaus owned the business, having run it since 1958.

“I bought two little dogs from him for a girl I knew in school,” Tom Steiger said. He wound up taking care of Klaus’ horses for him, then wound up working for him.

Tom had gone to school in Quincy, Ill., to learn watch repair and jewelry work and had worked elsewhere, prior to working for Klaus. He came at a time when Klaus was remodeling the building

“It just worked out great,” Tom said. “To Susie and I he was almost like having a second dad.”

Tom noted that Klaus was “a really good clock man,” while he did more work on watches. He later employed Leroy Grass to do most of his clock work after buying the building.”

Interestingly, Tom’s aunt and uncle, local preservationists Frankeye and Norbert “Boats” Donze, had owned the building before Klaus did, running a clothing store on one side and a jewelry shop on the other.

During their 40 years as owners, the Steigers were full-service jewelers, offering batteries, watches, engraving, diamonds of all sizes and shapes. They designed rings and pendants and did diamond upgrades. They also cleaned rings and repaired and cleaned watches and clicks. Plus, they would gifts and religious items.

Later, they bought the bakery next door and owned it for many years.

“It was a really busy downtown back then,” he said. He still owns that building, renting half of it to Louie’s Smokin’ Hot and half as an apartment.

During the past year, health has led the couple to look to retiring. Sue has developed thyroid cancer they decided it was time to find a successor.

They found it in Ste. Genevieve native Gayle Ralston, who has been in the jewelry business for 25 years in Kansas.

“Susie and I were in hopes that we’d find someone to buy the store,” Tom said. “and, lucky enough, it’s a local girl who’s got 25 years experience already in the jewelry business.”

After spending 40 years building up the business and tending to their clients, the Steigers badly wanted to pass the business on to someone who would continue in the same tradition.

“We couldn’t have gotten luckier than with her,” Tom said, “with the quality of work that she does. Plus, she’s used to the Ste. Genevieve clientele.”