Eight of nine members of the revamped Ste. Genevieve County Fair Board are in place. The county commission appointed the eight during last Thursday’s commission meeting.

The commissioners had opted to appoint a fresh board according to state statutes. In past years, the board had largely picked its own new members without county approval. The last several years, disagreements had arisen between the commission and the fair board over various issues, including insurance coverage. 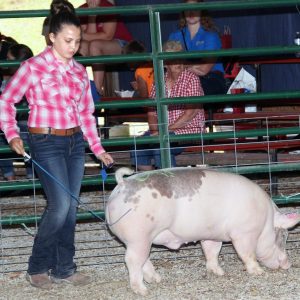 With the county fair’s emphasis on youth livestock and farming, the county commission wanted to see the local University of Missouri Extension office have a strong presence on the new Ste. Genevieve County Fair Board. (Herald file photo)

Estrella Carmona, David Bova and Martha Resinger were appointed to three-year terms. The commissioners wanted to see the University of Missouri Extension become an active participant in overseeing the fair and fairgrounds. Carmona has been with the local office since 2018 and has been extremely active in the community. Resinger is the lone holdover from the old board, having served on it many years. She is also a longtime former president of the R-II School Board. Bova currently holds that position.

Sam Fischer, Deanna Cartee and Jodi Ralston were each appointed for two-year terms, while Jean Warner and Brad Schilli were named to one-year terms. A ninth member is still needed.

Carmona and Bova, who will be the board’s treasurer, were both present at the meeting.

“We thank you for taking over,” Presiding Commissioner Garry Nelson told them. “We’re 100 percent supportive.”

First District Commissioner Karen Stuppy expressed confidence in the new group, although she pointed out that “there will be some growing pains” the first year.

While he was there, Bova also discussed the no-tax increase $20 million bond issue the R-II district will put on the April 5, 2022 ballot.

He went over the primary needs that would be addressed: Construction of a new Early Childhood Center (ECC), for ages 3-5, improved security and better Americans with Disabilities Act (ADA) compliance on all campuses.

Nelson said he was glad to get the input. He said he had been under the impression that the ECC was the only thing being done.

“I see now that it’s a lot more than just a preschool,” he said.

Bova added that the new ECC would also take some of the strain off the overcrowded elementary schools. Ste. Genevieve Elementary is already “maxed out” in Bova’s words.

Bova noted that safety, security and handicapped accessibility “are important in how they affect student success.”

Nelson agreed that the security upgrades are definitely needed.

“It’s not the same world I went to school in,” he said, mentioning the recent nationwide TikTok posts, urging students to bring weapons to school on Dec. 17. (No direct local threats were made.)

Nelson also brought up the idea of expanding Maple Street to Highway 61.

“Is it too early to talk about Maple Street expansion?” he asked Bova. “It would ease so much traffic.”

“It would solve all that,” Bova agreed, noting that the district also has “a lot of people coming from out of town” for extracurricular events. It would make access to the school more convenient for those activities, as well.

Nelson said it would be worth checking on the possibility of getting a Missouri Department of Transportation grant to help with it.

Road and bridge foreman Scott Schmieder reported that his crews have continued cutting limbs from trees, grading roads and hauling some rock as part of routine maintenance.

He said all equipment was functioning properly.

Schmieder and his men had also been helping in clean out the old 911 office and in removing old furniture and fixtures from one if the courtrooms at the courthouse.

City attorney Mark Bishop had raised some questions about the agreement the county and city have, for operating the county recycling center.  The city annually kicks in $5,000 toward the center’s operation, while the county funds the bulk, at about $60,000 a year.