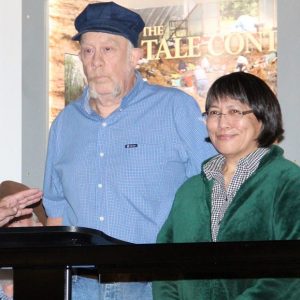 State and local officials and representatives of the scientific community were on hand Dec. 11, to officially mark the Ste. Genevieve Museum Learning Center grand opening and ribbon-cutting.

Those who spoke all agreed that the museum and its emphasis on dinosaurs, thanks to curator Guy Darrough, should be a huge boost to Ste. Genevieve.

Robert Wolk, president of the museum board of directors, was master of ceremonies. He gave a brief history of how the new museum and its possession of Darrough’s impressive collection came into being.

While it “was a nice museum,  focusing on local history, Wolk said it “became complacent and we had a tough time paying our bills.”

“The museum board actually decided we had to do something different,” Wolk said. “We wanted to be a thriving piece of this community and actually contribute to the livelihood of the community.”

That opportunity came about in 2014, when Bauman introduced Wolk to Darrough, who had a dinosaur museum in Bollinger County. Darrough expressed interest in combining museums and establishing a learning center.

He foresaw a center where “the story of life on earth could be explained, from the single cell … on up through life today.” It would be a place “where young and old minds could touch and enjoy life on earth,” Wolk said.

Wolk said Darrough was “a good salesman.” Later, a “think tank” with people like Cabot, Nelson, Wolk, former Mayor Dick Greminger, Bob Roth and others, who hashed out the idea.

Darrough required a professional building and a board that would run things for him before agreeing. The former Koetting store was purchased in 2018 and painstakingly restored. Bacon Commercial Design came up with a design to set up a modern museum and hands-on learning site in the century-old building.

A capital funding campaign was mounted to make this possible.