Owning the Anvil Saloon and Restaurant  is not a new idea to Stephanie Gadell.

Gadell, who bought the establishment from Madeline Jett this fall, along with her boyfriend, Cade Marceaux, has been around the place a long time.

She started working there several years ago at age 17.

“It’s always kind of been in the back of my mind but I never thought the opportunity would present itself, or it would be possible,” she said. “After my first shift here, whenever I was 17, whenever I went home, the first thing my dad said to me was, ‘Well, did you buy the place yet?’ He was just joking with me, but he foreshadowed a little bit. It’s kind of funny.”

Gadell grew up in Ste. Genevieve. Her parents are Robert and Dodie Gadell.

Gadell has been here off and on, spending two years in Louisiana, where she met Marceaux. Yet Ste. Genevieve and the Anvil have always called her back.

When she and Marceaux moved back to town, Gadell took about a month off, before taking her old job at the Anvil.

“Then, in a few months, the opportunity presented itself and he really pushed me to do it. So we both bought the place together. He’s been very supportive throughout the whole thing.” 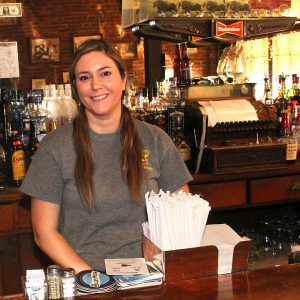 New owner Stephanie Gadell has been around the Anvil since she was 17. (Photo by MARK EVANS/Herald staff)

“We’re going to tweak it to make it our own, but keep the same aesthetic and atmosphere that the community enjoys,” she said. “We’ve made a few changes so far, but probably the most drastic thing we’re going to do is update the menu. We just want to expand and make this place the best that it can be. There’s so much untapped potential.”

The menu has been increased, with some new items and a return of some old favorites that had been dropped.

“We have three new items,” Gadell said. “We have a Caesar salad, we have fried pickles, hand-breaded, and then we added pasta, as well. And we brought back some of the old favorites that weren’t on the other menu, like pork chops.”

“All of our beef is certified Angus beef again,” she added.

She added that they might tap into Marceaux’s Louisiana roots at some point and try adding some Cajun cuisine.