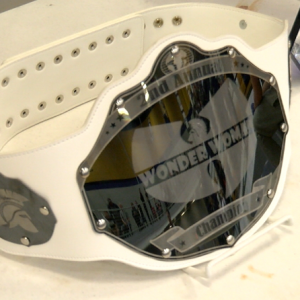 Here’s what a championship belt looks like for the Wonder Woman Tournament set for next week. (Photo courtesy Channel 17 KMIZ, Columbia/Special to the Herald)

Championship belts will be awarded to winner of each weight class, according to an email from tournament organizers.

Plaques will be awarded for second through eighth place. The team champion also will receive a traveling cup and trophy. The second- through sixth-place teams also will earn a trophy.

This wasn’t a good week for Ste. Genevieve wrestling with the Dragons unable to wrestle at all.

Ste. Genevieve was originally scheduled to have a dual against Sullivan at home on Tuesday, Dec. 14 — however, it was postponed until Thursday, Jan. 27, 2022.

The Dragons didn’t compete at respective weekend tournaments due in part to illnesses. The girls were originally scheduled to compete at Eldon, and the boys in Moberly.

Take Interstate-70 to Columbia. Take Exit 133 on I-70. At the end of the exit ramp, take a right onto State Highway Z. Stay on Highway Z before taking a left onto E. St. Charles Road, follow until seeing Battle High School on your right. Take a right into the facility driveway.