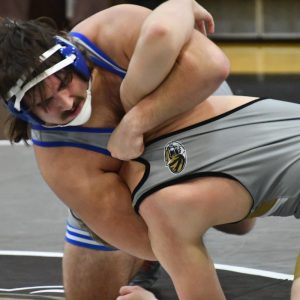 Valle Catholic 220-pound wrestler Noah Elbert turns over his opponent from Festus during last Wednesday’s triangular with the host Tigers and Oakville. The Warriors won both duals on the evening. (PHOTO BY ERIC VICCARO/Herald staff)

The Warriors won both matches at a triangular at Festus High School last Wednesday, topping Oakville, 40-24, and the host Tigers, 42-32.

“The kids kept the ball rolling with winning duals this season,” said Valle Catholic head coach Jacob Gegg. “I think we are currently 5-1 in duals. Both schools were much larger than us, with Festus having 900 students and Oakville 1,700.”

Valle Catholic came through despite some setbacks, which included traditional 195-pounder Jacob Calbreath unable to wrestle due to injury.

Then this past weekend, Valle Catholic placed 17th in a field of 41 high schools at the Battle at Katy Trail in Sedalia.

This marked the first time the Warriors ever competed at the Battle at Katy Trail, which takes place in the Mathewson Exhibition Center at the Missouri State Fairgrounds.

Kaden Gegg and Josh Bieser provided Valle Catholic with its best finishes. Gegg was fourth in the 106-pound weight group and Bieser was fourth at 152 pounds.

Bieser lost his first two matches of the season; but, he wrestled well against both Coleman Griffin of Trenton and Drystin Dotson of Lathrop.

Griffin recorded a 6-4 decision over Bieser in the semifinals and Dotson decisioned Bieser 3-2 in the third-place match.

Still, Bieser has put together a standout record of 19-2 this season, and it’s not even Christmas yet. He recorded five pins, including his quickest one in 51 seconds (Sherwood’s Hayden King).

“Kaden continues to be physical with his opponents,” Gegg said. “When he can get into his offense, he’s dominant. Josh continues to push a high pace opponents have trouble with. He was down early in his quarterfinal match, but chipped away at the lead and was able to finish the match winning by fall.”

Joseph Flieg also had a fine weekend, taking eighth in the 138-pound weight class. Flieg won four bouts by fall. He needed just 49 seconds to pin Ryder Coons of Mid-Buchanan in the fifth round of regular tournament action.

Noah Elbert (220), who also quietly is putting together a strong season with a record of 13-5, was involved in one of the more dramatic matches of the tournament. Elbert won in sudden victory over Richmond’s Larry Penniston, 6-4.

Wil Kuehn (120), Conner Clanton (126), Gavyn Joggerst (138), Jacob Calbreath (195) and heavyweight Espn Reed all finished in the upper half of their weight classes.

Coach Gegg said it was beneficial to compete in the Battle At Katy Trail because now the Warriors won’t go into the state tournament in February blind.

“Hopefully, we can use the knowledge we gained over the weekend to be better prepared for the state tournament this season,” Gegg said. “We know a few things we need to work on over the next few weeks.”

Despite not finishing among the top-10 schools at the Battle at Katy Trail, Coach Gegg left the event with confidence moving forward.

Select junior varsity wrestlers will compete at the Vianney Tournament on Friday, Dec. 31.

The Warriors will have their first home event of the season on Jan. 6, 2022, with a triangular against Maplewood and Hancock.