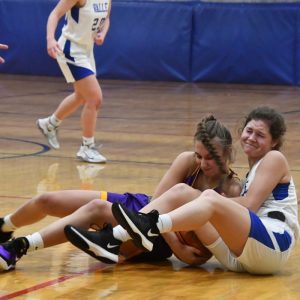 Gibson missed the second free throw, and the Warriors grabbed the rebound — but they didn’t have enough time to shoot the ball, and the buzzer sounded to end the contest.

Even though Valle Catholic dropped to 4-2 on the season with the loss, head coach Brian Bauman continues seeing positives as the Warriors develop.

Bauman noted Potosi had beaten Valle Catholic by a combined 42 points in the previous two games between the Trojans and Warriors.

“This was probably the first game since I’ve been coaching, against a stronger opponent, where we controlled the pace of the game — which played into our favor,” Bauman noted. “I told the girls they keep raising the ceiling, which is exciting.”

For both Bauman and the players, a tight game against a talented team like Potosi (5-2) proved to be a learning experience.

Potosi played a smothering full-court press mixed with some trapping for good measure.

This year, Valle Catholic guards Samantha Loida, Ade Weiler and Mia Weiler are showing more control and confidence. The Warriors didn’t use Ella Bertram inside as much as Coach Bauman would have liked.

Mia Weiler knotted the score at 43 all with a free throw. Weiler’s second foul shot attempt clanged off the rim, and Potosi’s Paige West grabbed the rebound.

Kaydence Gibson, earlier in overtime, gave Potosi a 43-39 lead on a jumper from the wing. That forced Valle to scratch back and deadlock the score later on in the period.

During the fourth quarter, Ade Weiler made a one of two free throws with 25.7 seconds left, giving Valle Catholic a 37-34 lead.

All the Warriors had to do was hold on; however, Potosi’s Lauryn Reed canned a 3-pointer along the baseline just before the buzzer sounded — deadlocking the score at 37-all and forcing overtime.

“The girls admitted they were getting tight and nervous down the stretch,” Bauman said. The coach also stated he could have substituted the Warriors’ guard rotation more — especially in the second half.

West finished the game as Potosi’s leading scorer with 12 points, all on four 3-pointers.

As for Valle, Bertram corralled a season-best 13 rebounds to go along with a game-high six blocked shots. Ade Weiler was tops in assists with seven, and sister Mia Weiler had the most steals with three.

Loida was Valle’s leading scorer with 13 points, including two 3-pointers and 3-of-4 from the free-throw line.

The Warriors will play the winner of a game between DeSoto and Viburnum at 1:30 p.m. Tuesday, Dec. 28.

Valle Catholic has been placed in the same half of the bracket as Bunker, Bismarck and Perryville. Other teams involved are Hillsboro, Crystal City, Kingston, Jefferson R-7, Cuba and West County, with the host drawing the No. 1 overall seed.