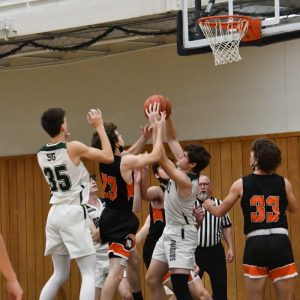 Then Rudy Flieg scored on a second-chance bucket on the Dragons’ next possession.

That set the tone for overtime as Ste. Genevieve downed Waterloo, 61-54, in the finale of the Border War Shootout on Saturday evening at Perry Park Center.

“It was a little scary going into overtime after having the lead, but our kids responded well,” Ste. Genevieve head coach Robert Coleman said. “They went out there and played some really good defense, only giving up five points.”

Coleman was pleased to see the Dragons hit several crucial shots, and a victory like this will only help Ste. Genevieve gain more confidence moving forward.

What’s more, the Dragons showed they could beat a team with plenty of height. Alexander Stell is listed at 6-foot-7, Logan Calvert 6-foot-5, Ty Lenhardt 6-foot-3 and Ian Schrader 6-foot-2.

“They had a lot of size,” Coleman noted. “This is something we haven’t seen yet this year. I thought our guys did a great job of outrebounding them, 31-28.”

The Dragons quickly put together a game plan for Waterloo, after having played the previous night at Jefferson R-7 in Festus — which was a 31-point blowout victory.

Aiden Boyer played a fantastic game, with 17 points including 7-of-9 on free-throw attempts.

Flieg also came through with a double-double, scoring 13 points and snaring 12 rebounds.

Ricky Hunter tallied all 10 of his points in the second half, helping the Dragons forge ahead. Nick Plati dished off five assists to round out the superlative performances.

Waterloo’s Ty Lenhardt forced overtime by making a running layup with 4.3 seconds remaining. The Dragons had a chance to end the game in regulation, but they couldn’t get a good look at the basket.

Hunter canned a key 3-pointer late in the third quarter, helping give Ste. Genevieve a 37-33 lead.

The fourth quarter remained taut; however, Thomas O’Brien’s running one-hander gave Ste. Genevieve a 44-37 edge with 4:43 left in the fourth. O’Brien later made two free throws to give the Dragons a 61-51 cushion in overtime, with Stell’s 3-pointer only prettying up the final outcome.

“I think it’s a decent start to the season,” Coleman said. “I know our guys believe we could have won those two games we lost (Farmington, Saxony Lutheran). But, we are playing much better now than before, especially on the offensive end.”

The Dragons have drawn the sixth seed, and they will play Fredericktown at 8:30 p.m. on Tuesday, Dec. 28.

Ste. Genevieve has been placed in the same half of the bracket as No. 3 Festus and Crystal City.

Other schools in this half are No. 2 Park Hills Central, No. 7 Hillsboro, Herculaneum and DeSoto. South Iron is the tournament’s top seed.