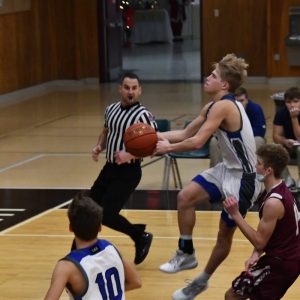 Valle Catholic’s Carson Tucker (white jersey) moves through the lane with the ball during the first-ever Border War Shootout on Saturday at Perry Park Center. Drew Grohmann of Red Bud, at right, tries to defend Tucker. The Musketeers downed the Warriors, 70-61. (PHOTO BY ERIC VICCARO/Herald staff)

PERRYVILLE — Max Diewald took matters into his own hands in lifting the Red Bud High School boys’ basketball team to a 70-61 victory over Valle Catholic at the Border War Shootout on Saturday.

Diewald canned eight 3-pointers, and made 11 field goals in all, as part of a 30-point performance. And Devin Hall added 15 points, including 7-of-8 from the free-throw line.

“Red Bud had a couple of guys shoot the ball really well, especially No. 11 (Diewald),” Valle Catholic head coach Tyler Search said. “I didn’t really expect him to shoot it as well as he did. It’s always tough to win when a guy hits eight 3’s on you.”

What made matters more difficult?

Well, athletic Chase Fallert wasn’t available, instead at the University of Missouri for a showcase baseball camp.

This marked the first year for the Border War Shootout, the brainchild of Perryville athletic director/assistant principal Justin Dreyer and the Pirates’ administration. Five games were on the schedule.

Red Bud players wore masks underneath their chin while they played, as still mandated by the Illinois High School Association.

Aiden Heberlie stepped up to fill Fallert’s void, scoring a team-best 21 points. Heberlie also grabbed seven rebounds, dished off a pair of assisted, had one blocked shot and affected the trajectory of another field goal.

“Aiden did a great job of bringing energy,” Search added.

Diewald swished a 3-pointer on the baseline, putting Red Bud ahead 17-15 at the end of one. The Musketeers pulled ahead by halftime, capped off by Trent Sternberg’s dribble drive for two at the end of the second period. Red Bud was ahead, 36-26.

Heberlie scored a pair of baskets inside, and had the chance to convert two traditional 3-point plays. However, he missed the and-one foul shot both times, and the Warriors were down 47-43 at the end of three.

Valle Catholic’s Harry Oliver scored inside, cutting Red Bud’s lead to 56-48 with 5:22 left in the fourth quarter. However, that’s as close as the Warriors would get the remainder of the way.

“It was fun to play in the Border War Shootout,” the coach commented, “even though we came up short. I hope we will continue to play in this, and I hope it becomes a popular event from all the fans around the area.”