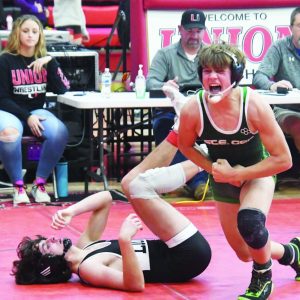 Ste. Genevieve’s Evan Winters flexes in celebration after rallying to Landon Rogers from Northwest Cedar Hill in the 145-pound third-place bout on Saturday afternoon at the Union Tournament. (PHOTO BY ERIC VICCARO/Herald staff)

On Saturday, a select number of Ste. Genevieve boys showed their mettle, too, which included a pair of top-three finishes from 145-pounder Evan Winters and heavyweight Ryan Schmelzle.

And Ste. Genevieve head wrestling coach Jared Bonnell was satisfied with how the Dragons competed at the Union Tournament.

“We try to hit tournaments that have a good mix of schools,” Bonnell said. ”This helps us see a variety of competitors, and normally it will offer us several tough match-ups.”

Bonnell doesn’t want to load the Dragons’ schedule with smaller tournaments, or face the same wrestlers week after week. It’s all about growth and progress from the coach’s viewpoint.

The boys claimed sixth place out of 21 teams, which included two statewide powerhouses in Marshfield and Northwest (Cedar Hill).

The girls battled two tornado warnings, sheltering in place twice, en route to a ninth-place finish in a field of 20 teams.

Past state placer Isabel Basler (130 pounds) continues to impress, this time winning her weight class with three pins — including her quickest in 0:47 over Ursula Sandford of Camdenton. Basler is 5-0 on the season.

Paityn Basler excelled on the evening, earning third place with three out of four pins. Basler, at 110 pounds (4-1), lost to Springfield Central’s Jaidyn Pohlsander. But, she defeated wrestlers from Camdenton, Seckman (Imperial) and Northwest.

Dakotah Medows (4-2) also picked up a medal for the Dragons, taking fourth with three wins. Washington’s Lindsay Sprung defeated Medows twice, once by third-period fall and also a 5-0 decision.

As for the boys, Schmelzle reached the championship bout in his weight bracket before suffering a 2-0 decision against Northwest’s Andrew Hinchey.

The most heartwarming story took place at 145 pounds as Evan Winters rallied to pin Northwest’s Andrew Rogers in overtime. Rogers had a five-point lead on Winters during the bout, their second encounter of the day.

“Evan’s third-place match was pure guts,” Bonnell noted. “It’s always nice to get revenge from a match lost earlier in a tournament. Evan never stopped wrestling in that match, and that’s why he won. Evan has a grit about him.”

Karter Worley and Elijah Holifield also reached the medal stand with respective fourth-place finishes in the 106- and 195-pound weight classes.

Worley went 2-2 on the day, suffering a 5-3 decision versus St. James’ Luke Marlatt in the third-place bout. Marshfield’s Parker Hammons pinned Holifield at the 3:27 mark of the third-place match.

Junior varsity members wrestled at the Sikeston Tournament on Saturday, with Jacob Schweigert earning a gold medal and Gavin Amlong a bronze medal.

The Ste. Genevieve boys and girls will be heading their separate ways this week, with the boys heading to the two-day Moberly Duals on Friday and Saturday. Junior varsity will travel to Cape Central for a tournament next Monday.

The girls will be competing in the two-day Eldon Tournament on Friday and Saturday.

This past Tuesday’s dual with Sullivan has been postponed, and rescheduled for Jan. 27, 2022.