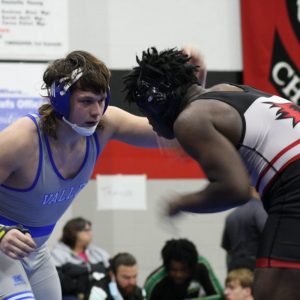 Valle Catholic’s Jacob Calbreath (left) made his season debut on Saturday at the Second Annual Colombo Classic. Calbreath, shown here taking a shot, didn’t disappoint with a gold-medal performance at 195 pounds. (PHOTO BY JENNIFER BIESER/Special to the Herald)

That was the case last Saturday as the Warriors claimed the Second Annual Colombo Classic with 170 points — 27 more than Lift for Life Academy.

“It’s a good confidence boost,” Valle Catholic head coach Jacob Gegg said, “and a great opportunity to get some recognition for the hard work they have been putting in during the offseason and season.”

The undefeated Bieser bumped up a weight class because Eli Rolwes was out due to injury. Jayce Bales moved up to 152 pounds, helping fill that weight class.

Joseph Flieg improved to 12-1 on the season, winning by fall over Aries Nicholas of Owensville in the 138-pound championship bout (3:12). Coach Gegg said Flieg’s dedication in the weight room made it happen.

Kaden Gegg continues to show his moxie as one of the most physical lightweight wrestlers in all of Missouri.

A 2020 state qualifier, Gegg recorded four victories by fall and a fifth by injury default — over Demarion Steeples from Lift for Life. Gegg’s individual record now stands at 14-2.

Rounding out the gold-medal standards, 195-pound Jacob Calbreath won five matches by fall, including his quickest pin in just 0:31 over Elijah Wilson from Owensville.

Noah Elbert continued his strong early-season showing, picking up third in the heavyweight division with a hard-fought 10-7 decision over Jason Jones from New Madrid County Central.

Overall, Gegg was understandably pleased with the developments from Saturday.

“It was a good test to see how we stack up against our district competition,” the coach commented. “Lift for Life is a young up-and-coming program. Every team is known for hitting certain moves or being good in certain positions.”

This will be another busy week for Valle Catholic, with a triangular at Festus — including Oakville — today.

The Warriors will travel to Sedalia this weekend for the Battle at Katy Trail at the Mathewson Exhibition Center. Matches are scheduled for Friday and Saturday.