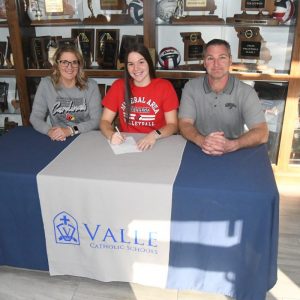 Bertram said it’s been the place for her since she was younger.

“I have always been close to MAC,” she said. “When I was younger, I used to go watch their volleyball games, and participate at the camps. They have an amazing volleyball program, and I am glad I can be a part of it.”

Bertram acknowledged she was looking at other colleges, but Ella said becoming a Cardinal was the right decision.

This past week has been special for Bertram, who also participated in a first-ever all-star game with teammate Sam Loida on Saturday at Lafayette High School in Wildwood.

Bertram capped her stellar scholastic volleyball career by crossing the 1,000-kill threshold as a senior.

It was just one of the many memories she made at Valle Catholic, which included a third-place finish in Class 3 this past November and second place in Class 2 during the 2020 campaign.

“My senior year meant a lot to me,” Bertram said. “I wanted to come into the season strong and put it all on the court. It also meant a lot to me to get all-state honors again because it showed me what I can accomplish, and that I am still improving.”

Bertram said earning her 1,000th kill came as quite a shock, and she received special recognition.

MAC put together a record of 14-8 in 2021 under head coach Tim Copeland and assistants Tracie Casey and Elle Russell.

The Cardinals were eliminated from the Region XVI Tournament by rival Jefferson College in straight sets on Oct. 29.

Overall, Bertram pounded down 464 kills as a senior, with a stellar .424 hitting efficiency, helping Valle Catholic (32-5-3) to district and conference tournament championships.

She also finished with 150 total blocks, with 37 solo ace stuffs plus 61 digs, showing versatility even playing a “set in stone” position such as middle blocker.

“As a volleyball player, I have the mindset of working hard, and wanting to be the best out there,” Bertram explained. “I think Coach Copeland saw in me that I want to improve my skills and I am willing to step up to the next level.”

Copeland was in attendance at Bertram’s signing ceremony, also joined by Valle Catholic officials, coaches, her friends and family, here in Ste. Genevieve.