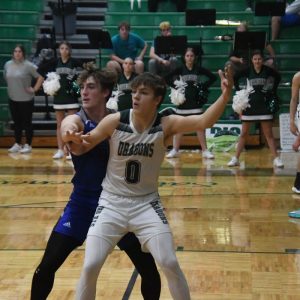 Ste. Genevieve and Valle Catholic resumed the “Old Settlement Showdown” this past Friday at a packed Peggy J. Johnson Gymnasium.

This time around, the Dragons provided too much for the Warriors in a 62-51 conquest behind Rudy Flieg’s 15 points.

“It was tougher for us to guard Rudy when Harry (Oliver) was in foul trouble,” Valle Catholic head coach Tyler Search said. “That really got us off our game, early in the contest.”

“Rudy worked really hard in the off-season,” the coach commented. “He’s gotten stronger, worked on his footwork and improved his outside game. I think he’s very determined to have a successful senior year, and he’s also stepped up being a leader.”

Both Valle Catholic and Ste. Genevieve played pretty much straight up man-to-man versus each other the entire game — and that only helped heighten the drama.

The game, which started one hour earlier due to Friday’s unseasonable weather, marked the latest chapter in a saga between the cross-town foes.

That’s when Ste. Genevieve responded. Blake Morganthaler dropped in a 3-ball from the baseline. The teams traded turnovers.

Then Ricky Hunter then made a layup and elbow jumper to give the Dragons a 57-47 advantage at the 2:55 mark. Victory was well within Ste. Genevieve’s sight, capped off by a nifty give-and-go between Nick Plati and Aiden Boyer in the final minute.

What was lost from this game was Chase Fallert’s outstanding performance, with 18 points — including two 3-pointers. He also facilitated the Warrior offense, finding Heberlie most of the time for dribble drives to the basket.

“Chase is a really good guard,” Coleman said. “He’s strong, can attack the basket and shoot well from the outside. I don’t think there is a lot you can do (defensively). Our focus was just trying to keep him in front of us.”

Both Plati and Boyer finished with five caroms, including Boyer’s three on the offensive glass.  Thomas O’Brien and Plati both had three assists. Carter Klump was tops in steals with three.

The game featured the type of passion were all accustomed to from the “Old Settlement Showdown,” which included a double technical foul in the third quarter.

Both Ste. Genevieve (3-2) and Valle Catholic (1-1) will participate in the Border War Shootout set for Perryville at the Perry Park Center this Saturday.

Admission will be $5 for those six years of age and older. Kids five years old and younger are admitted free.

Valle Catholic will play Red Bud at 3:15 p.m., with Ste. Genevieve squaring off with Waterloo in the finale at 5 p.m.

There will be a trophy awarded to the state whose teams win the most games.

Ste. Genevieve also travels to Festus for a game against Jefferson R-7 beforehand on Friday.

Valle Catholic entertains Fredericktown tonight before traveling to Park Hills for a game versus Central on Friday.

The Ste. Genevieve Herald will catch up with recent junior varsity results in the Dec. 22 edition.