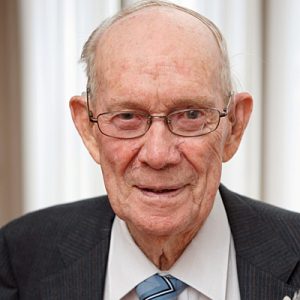 He was preceded in death by the love of his life Ruby, his siblings Marie Rose, Dolores Koetting, Frank Uding, and Shirley Daubel.

Clarence was a 1944 graduate of Valle High School but was called to military service before graduation ceremonies. He was part of the 82nd airborne division which marched in the Victory over Europe parade in NYC. He was a member of the K of C, the American Legion (50 years), and VFW. He was a WWII participant in the Central Missouri Honor Flight program. He was recognized by the Foundation for Restoration of Ste. Genevieve for his contribution to the preservation of multiple historic buildings. He, along with his brothers, were owners of Ste. Gen. Building & Stone Co. He was a founding member of the Pointe Basse Development Corp. and was involved in other community development. Clarence was a devout catholic, loving husband, father, grandfather/great-grandfather, and a friend to many. Interests included traveling with family/friends, hunting/fishing, flying remote control airplanes, wood working, baking, and card playing.

Visitation will be at Ste. Genevieve Catholic Church. Family requests masks to be worn on Monday, December 13, 2021 from 9:30 am till 11:00 am.  Service will be at Church of Ste. Genevieve on Monday, December 13, 2021 at 11:00 am.  The Clergy will be Rev. Mitchell Baer who provided spiritual support and guidance during his final days.  Burial will be at Valle Spring Cemetery in Sainte Genevieve with full military services provided by VFW Post 2210; Memorials can be made to Valle Catholic Schools Foundation or Heavenly Hope (community based support for those in need). Online condolences can be left at www.baslerfuneralhome.com