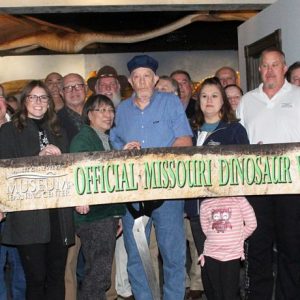 State and local officials and representatives of the scientific community were on hand Saturday, to officially mark the Ste. Genevieve Museum Learning Center grand opening and ribbon cutting.

Those who spoke all agreed that the museum and its emphasis on dinosaurs, thanks to curator Guy Darrough, should be a huge boost to Ste. Genevieve.

Robert Wolk, president of the museum board of directors, was master of ceremonies. He gave a brief history of how the new museum and its possession of Darrough’s impressive collection came into being.

While it “was a nice museum,” focusing on local history, Wolk said it “became complacent and we had a tough time paying our bills.”