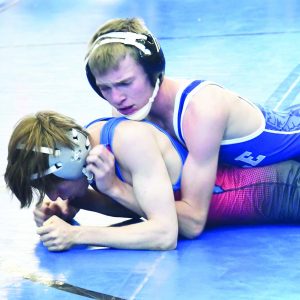 Valle Catholic’s Kaden Gegg (top) controls Jack Pecoraro of St. Louis’ Priory School during a 106-pound bout at the John Burroughs Tournament on Saturday afternoon. Gegg rallied to win, with a fall at the 5:01 mark. (PHOTO BY ERIC VICCARO/Herald staff)

The Warriors racked up 364 points through seven rounds of action en route to the championship. Priory was second, 76 points behind. Wright City was third overall (283.5).

“I think your first tournament win as a coach will always be a cherished memory,” Valle Catholic head coach Jake Gegg commented. “The kids worked for it, and they held each other accountable.”

Gegg said the Warriors have been pushing each other in practice — getting better each day.

“The biggest part of the success was just the ability to field a full team, which is the first time in program history,” Gegg noted.

Wrestling is a sport in which the mental and emotional benefits directly translate into others, including football and track and field.

Josh Bieser’s state medal also has helped spark interest in wrestling. Bieser continued to shine at the Burroughs Invite, with the senior winning the weight class title at 160. Noah Elbert also was tops in his field, the heavyweight champion.

Kaden Gegg (106), Joseph Flieg (132) and Bieser picked up points in every match they won. Jayce Bales also excelled for the Warriors, with a second-place finish.

Tucker Bertrand was the most selfless individual on the day for Valle Catholic, bumping up to 195 pounds. Bertrand basically gave up 25 pounds per match, still earned three wins and placed fifth overall in his class.

“A confident wrestler is a dangerous wrestler,” Gegg commented.

Bieser won all of his matches by fall, the quickest pin in 32 seconds over Brendan Yasinev of Parkway Central. Webster Groves’ Max Knight was Bieser’s biggest challenge, and Josh still pinned him in 3:07.

Gegg said Bieser is still transitioning down to the 152-pound class. Regardless, Bieser’s technique and explosiveness was on full display during the weekend.

Elbert, despite just 18 months of wrestling behind him, might be undersized — but Noah still conquered in five matches by pin and he recorded a 9-5 decision over Riley Shive of Wright City. He pinned Christian Brisco from Brentwood in just nine seconds.

Tim Okenfuss (182), like Bales, also wrestled with consistency throughout the tournament, going 6-1 for second place.

Okenfuss pinned Buddy Essen from Priory School in 0:28 and Ben Wasserstrom of Ladue Horton Watkins in 0:32.

Flieg also earned second in his weight class, with five pins and a 5-3 decision over David Ciroba of Ladue Horton Watkins.

Will Kuehn placed third for the Warriors at 120, winning all of his bouts by fall. Gavyn Joggerst also had a bronze-medal finish, claiming two wins by pin and another via injury default. As did Eli Rowles (170), with three wins by fall and one via a 12-4 major decision over Priory’s A.J. Nance.