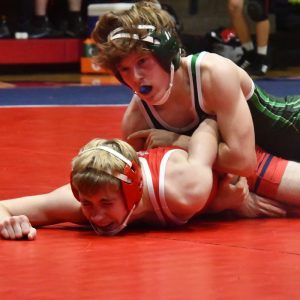 Ste. Genevieve’s Bryant Schwent controls the arm of Central’s Cole Crocker during the first period of a 120-pound bout on Wednesday evening at Foulon Field House in Park Hills. Schwent pinned Crocker in 3:26. This past weekend, Bryant won his weight class at the Westminster Tournament. (PHOTO BY ERIC VICCARO/Herald staff)

The Dragons were decisive, with the boys blanking the Rebels 78-0 and the girls recording a 39-18 victory thanks to having better depth.

“I think more than anything, we were just ready to wrestle someone other than ourselves,” Ste. Genevieve head coach Jared Bonnell said.

Bonnell said Ste. Genevieve caught Park Hills at the right time because the Rebels were dealing with injuries.

“They are also adjusting to specific weight classes, so I imagine they will be a different team in the second half of the season,” Bonnell said of the Rebels.

Ste. Genevieve’s wrestlers kept their opening-night jitters under control, and the Dragons executed their moves on the mat with precision.

Elijah Holifield, back this season after missing the 2020-21 campaign with an injury, had the quickest pin of the evening in 0:53.

Hunter Settles from Central proved to give Ethan Ogden a stern test at 182 pounds; however, Ogden still pinned Settles in 4:42.

This past weekend, Ste. Genevieve continued its strong early-season performance, earning second at the Westminster Christian Academy Tournament in Town and Country.

The Dragons were second overall with 201 points, 24 fewer than champion Washington. Ste. Genevieve was 14 points ahead of Timberland.

Bryant Schwent (113), Gavin Gross (132) and Ethan Ogden (182) were all the gold-medal standards in their weight classes.

Schwent won all five of his matches by pin, including his fastest in 0:31 over Russell Dunkmann of Orchard Farm.

Ogden garnered all four of his matches by fall, including a rapid one in 0:07 over Clayton’s Dorian Shelton. He pinned Michael Rightnowar from Timberland (2:51) for the championship.

Propst and Schmelzle both earned second place, with Propst earning a hard-fought 9-7 sudden victory over Ethan Flemming from DeSmet. Schmelzle won three matches by fall, including one in 0:35.

In the lighter weights, Drury placed second — reaching the title bout at 120 before falling to Washington’s Will Kelpe (3:03).

Isaiah Basler (126) and Winters (145) both earned bronze medals. Winters pinned teammate Justin Schwent, who was wrestling for the “B” squad, in 0:19.

Basler recorded a 9-2 decision over Alec Pecka of Washington for third place in his division.

That was the big highlight from the girls’ slate, with the Dragons winning by 21 points.

Paityn Basler, Dakotah Medows and Kate Mesplay all earned wins by fall in the respective 115-, 125- and 159-pound weight classes, with Basler’s pin in 2:16.

Bonnell complimented both the boys and girls for wrestling with consistency throughout the dual.

The Dragons will have a conference dual at Cape Central on Thursday before heading to the Union Tournament on Saturday.

Both genders will be featured at this spectacular event.