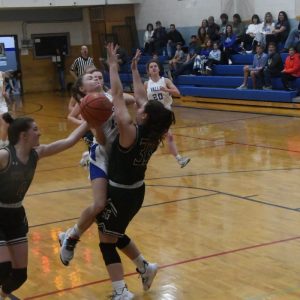 Valle Catholic’s Mia Weiler (white jersey) attempts a shot in the lane while defended by Ste. Genevieve’s Regean Naeger (4) and Chloe Staffen (33) on Thursday during the 49th Annual Valle Catholic Tournament. Weiler was named to the all-tournament team. (PHOTO BY ERIC VICCARO/Herald staff)

For the first time since 2004, the Valle Catholic High School girls’ basketball team won its own tournament.

The 49th Annual Valle Catholic Tournament was a time of celebration for the Warriors, who won three games by a combined 24 points.

The piece de la resistance for Valle Catholic was last Thursday’s 38-30 victory over Ste. Genevieve in a tournament version of the “Old Settlement Showdown.”

“Valle has post players that are hard to guard with their size underneath,” Ste. Genevieve head coach Jordanna Walk-Robison said. “Their guards also get after it defensively, and they forced us into turnovers.”

Warriors’ coach Brian Bauman was pleased to see how well the girls played the entire week.

“It was a matter of just getting started on the right foot,” Bauman noted, “defeating two rivals, and holding off a very physical St. Paul team.”

For their hard work, the girls earned a cushy reward — no practice last Friday.

“I’ve been overly impressed with our work ethic this year, and they rightfully deserved a day off,” Bauman said.

Samantha Loida and Mia Weiler also made the all-tournament team, serving as the floor leaders both offensively and defensively.

In the win over Ste. Genevieve, the Warriors found their footing in the fourth quarter, outscoring the Dragons 15-4 for an eight-point triumph.

Loida chipped in with four points and Ella Bertram two during the fourth period.

Both Loida and Weiler finished with six rebounds versus the Dragons. Four of Loida’s caroms were on the offensive glass, keeping possessions alive.

Weiler and Loida combined for 11 steals and Mia Weiler and Bertram added four swipes each.

Loida also had seven assists and Weiler four. Both Bertram and Christine had one blocked shot each.

The Valle Catholic Tournament will celebrate its 50th annual event during the 2022-23 season. Bauman was pleased with how the tournament ran.