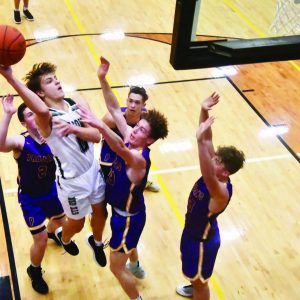 Ste. Genevieve’s Rudy Flieg (0) skies for a shot while defended by three Potosi players on Friday evening during the Third-Place Game at the FCNB Bank-It Challenge in Sullivan. Flieg was named to the all-tournament team along with teammate Aiden Boyer. (PHOTO BY ERIC VICCARO/Herald staff)

“It was nice to win the third-place game,” Ste. Genevieve head coach Robert Coleman said. “I was proud of our guys, bouncing back after losing the night before. It’s always a good thing to come away with some hardware from a tournament.”

Ste. Genevieve center Rudy Flieg and forward Aiden Boyer were both named to the all-tournament team.

“I was very proud of those guys and their accomplishments,” Coleman said. “It is a well-deserved award. Both of those guys did a great job with rebounding in the tournament and creating an inside presence on offense and defense.”

Potosi knotted the score at 34-all early in the fourth quarter on a Colton Politte free throw, then the Dragons slowly and effectively built their lead throughout the rest of the period — eventually resulting in the win.

Flieg and Boyer followed their own missed layups and made free throws at the line. Carter Klump also played well in the clutch with an inside bucket and two made foul shots.

What was once a taut game, turned into a 47-36 lead for Ste. Genevieve with 2:57 remaining in the fourth quarter.

The Trojans wouldn’t get any closer than an eight-point deficit the rest of the way as Ricky Hunter sank several free throws.

Hunter was another reason for Ste. Genevieve’s second-half surge, as he connected on a pair of 3-pointers in the third quarter.

Coleman said the Dragons were more patient on offense in the second half as well.

Hunter was the Dragons’ leading scorer with 16 points, to go with two steals and two deflections. Flieg posted a double-double with 14 points and 11 rebounds (six offensive).

The Dragons recovered from Thursday’s 70-55 semifinal loss to Farmington, another conference rival.

Ste. Genevieve closed the Knights’ lead to seven points in the second half only to watch Farmington make crucial free throws down the stretch.

The Dragons opened the tournament with a slim 67-63 victory over St. James back on Monday, Nov. 29.