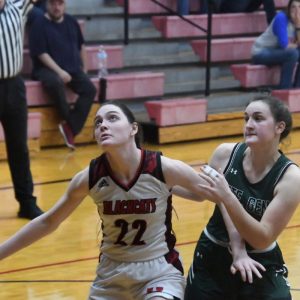 HERCULANEUM — The Ste. Genevieve High School girls’ basketball suffered its second loss of the 2021-22 season, falling to Herculaneum 53-30 on the road Wednesday evening.

Herculaneum’s Macey Pillard proved to stand head-and-shoulders above everyone else, with 20 points on seven field goals and 6-of-13 from the free-throw line.

Pillard was the only player to score in double figures, and she also grabbed 14 rebounds for a double-double. Rebounding totals were provided by the St. Louis Post-Dispatch statistics website.

“Herculaneum put a lot of full-court pressure on us, and we struggled controlling the ball,” Ste. Genevieve head coach Jordanna Walk-Robison said. “Macey was tough to guard with her height, and she has some skill around the basket.”

There were some bright spots for the Dragons, including nearly equaling their point total from the first game of the season against St. Pius X (Festus) in the Amped Lifestyle Shootout at Farmington on Nov. 20.

“I thought that when we were able to set up our press, the girls did a good job of creating turnovers,” Walk-Robison explained, “and I thought we did a better job in the second half of keeping them off the boards.”

Ste. Genevieve will look for its first win of the season during this week’s Valle Catholic Tournament — which also means the Dragons won’t need to leave city limits.

Ava Meyer pulled down a team-best nine rebounds (five on the offensive glass), and she also had three steals and two pass deflections.

Naeger connected on a 3-pointer from the right wing, pulling Ste. Genevieve within a 12-10 deficit at the 2:47 mark of the first quarter.

Asher scored two points on a putback lay-up, cutting Herculaneum’s lead to 18-14 in the second quarter, before the BlackCats began asserting themselves — going on a 17-1 run in the final 6:33 of the frame for a 35-15 halftime cushion.

The Dragons were unable to carve Herculaneum’s lead in the second half, which grew to as many as 25 points.

The Dragons (0-2) played St. Paul Lutheran of Farmington on Monday, too late for this press run of the Ste. Genevieve Herald. They will play St. Vincent at 6 p.m. tonight and then city rival Valle Catholic at 7:30 p.m. Thursday.