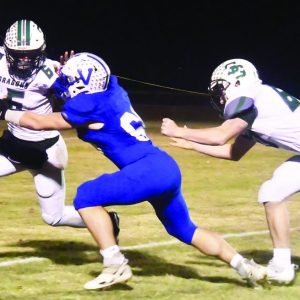 All-MAFC honors were released on Monday, Nov. 22, and the Dragons are well-represented on this elite squad.

Running back Zach Boyer was a unanimous first-team selection on offense, and Propst also was selected for the first-team offensive line.

“We were glad that Dale was able to win this award because he was more than deserving,” Ste. Genevieve head coach Jay Pope said.

“Dale was a very good lineman last year,” Pope continued, “so his improvements were really the intangible things that he provided the team this year. He was a tremendous leader and role model for the younger linemen.”

“Zach had an incredible season,” Pope noted. “He ended up with some crazy statistics, and etched his name in the MSHSAA record book a few times at the wide receiver position.”

Pope says Zach Boyer will earn more awards, including the possibility for all-state accolades when they are released next week.

What’s more, Boyer rushed 28 times for 419 yards and four more scores. He was explosively prolific, with a 78-yard reception and a 90-yard run this season.

Aiden Boyer threw for 1,933 yards and rushed for 137 more with two TD. Boyer had 35 passing TD, with a scant six interceptions. His longest throw covered 80 yards.

Schwent connected on 45-of-53 extra-point kicks (85 percent); however, he didn’t attempt a single field goal all season.

“Those four guys (on the first team) really improved as individuals this year,” said Pope, who also credited Thomas O’Brien and Carter Klump for their success.

Many teams avoided running toward O’Brien, a linebacker, and Klump, a defensive back who lined up against the opposing team’s best wide receiver and still managed to have five interceptions.

“Will probably had as much growth this season as anyone after missing last year due to injury,” Pope said of Vaughn. “He will definitely be a guy our defense is going to depend on heavily next season.”