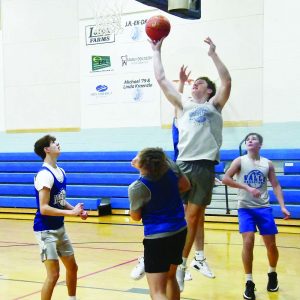 Valle Catholic’s Harry Oliver skies for a layup during the Blue & White Scrimmage on Saturday evening.

The Warriors will open the regular season on Tuesday, Dec. 7, at home versus Perryville.

Clayton Drury defeated Wyatt Fallert, 7-6, in the championship round of the 3-point shooting contest at the start of the event.