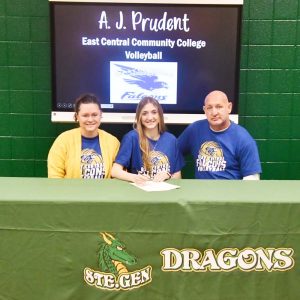 Prudent becomes the first volleyball player this academic calendar year to sign on at the college level.

So, why East Central?

“It was small enough to feel like home, but big enough to explore new things,” Prudent said of the school, which reportedly had an enrollment of 2,629 students in 2018 and 242 academic staff.

Prudent explained she was open to any school that was local; but, also she wanted an opportunity to play right away.

The Falcons have won six NJCAA Division II regional titles since reinstating the volleyball program in 2007.

Mathes-Peters said she loved Prudent’s passion and enthusiasm for the game, which is what made A.J. so marketable.

Prudent, who stands 5-foot-10, became a force for the Dragons this season — with a school-record 86 blocks, with 16 solos and 70 ace block assists. She also put down 64 kills in 192 attack chances.

“A.J. has a strong blocking presence when she is in the front row,” Basler said. “She also produces a really great swing that will be a deadly weapon once she gains consistency.”

“The amount of growth I’ve seen from her since her sophomore year is phenomenal,” Basler added. “I believe as she continues to work hard, she will become an even better athlete.”

Prudent’s new school-record block total has been commemorated with a special volleyball in the trophy case at Peggy J. Johnson Gymnasium. The previous record-holder was Anna Sedgwick.

“I take blocking personally,” Prudent said, “and I have worked hard trying to master the craft.”

Prudent fondly recalled her senior season, helping the Dragons to an 18-10-1 record and a berth in the district finals versus Valle Catholic.

“My senior year was filled with a lot of great memories,” she said. “Our ultimate goal was to win a district championship. Although we came up short, we always left it all on the court every single game.”

Prudent said she will major in criminology at East Central, with the hopes of becoming a FBI field agent supporting forensics in criminal cases.