Thomas E. Koetting, 82, of Newburgh passed away on Tuesday, November 16, 2021. Son of the late Edwin and Katherine (O’Connell) Koetting, he was preceded in death by his sister, Mary Catherine Koetting; brother, Bernard Koetting, and twin brother, Lawrence Koetting. 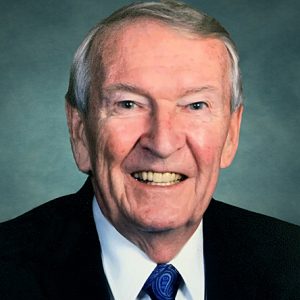 A graduate of the University of Missouri, Columbia, he was stationed in Germany as a Lieutenant in the U.S. Army before starting his career as a CPA with Price Waterhouse in St Louis, MO. The arc of Tom’s professional career demonstrated his considerable financial and negotiating skills, culminating with his role as Vice President – Sales and Marketing for Peabody COALSALES Company, the position from which he retired in 1996. After retiring, Tom lent his time and expertise to local small businesses through the Evansville chapter of SCORE (Service Corps of Retired Executives), ultimately serving a term as its president.

Maggie and Tom moved to Newburgh in 1981 and remained close to friends and family in St. Louis and Ste. Genevieve, where Tom was born and graduated Valle High School (Class of 1957). In his youth Tom worked at the family business, Koetting’s Foodway, later serving on the family board of directors. Tom looked forward to reading each week’s Ste. Genevieve Herald and never outgrew his fondness for Oberle sausage. A fan of country and bluegrass music, Tom was the informal travel agent and entertainment director for a wide group of friends, leading them on numerous trips and outings. Never one to miss a party (many of which he hosted with Maggie), Tom was known to honor friends and loved ones with poems and limericks – most were humorous, Maggie’s were amorous and all are cherished. Tom was a devout Catholic and an active member of the Holy Rosary Catholic Church; he and Maggie served as pre-Cana advisors and were recognized for their service to the Diocese of Evansville with the Bruté award. Always an optimist, Tom was a mischievous brother, a patient and guiding father and grandfather, a trusted uncle, a loving husband and loyal friend.

A Mass of Christian Burial was held on Saturday, November 20, 2021 at Holy Rosary Catholic Church, Evansville, IN. A celebration and burial in Ste. Genevieve will be held at later date.

Memorial contributions may be made to Cancer Pathways Midwest (formerly Gilda’s Club Evansville). Condolences may be made online at www.AlexanderNewburghChapel.com.