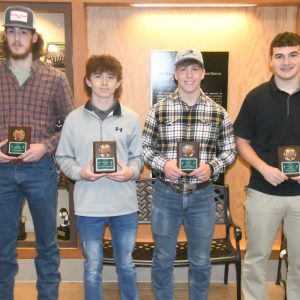 This year’s football awards recognition ceremony at the Ste. Genevieve R-II Performing Arts Center was an uncommon yet satisfying event.

First-year head coach Jay Pope handed out four awards this season, with a new way of celebrating the Dragons’ success, on Monday, Nov. 15.

Ste. Genevieve had a three-win improvement this season, reaching the Class 3 District 2 semifinals before falling to cross-town rival Valle Catholic, 69-35, in an “Old Settlement Showdown” for the ages.

Will Vaughn was named the scout team player of the year.

“He was the most unselfish player on the team,” Pope said. “He made himself (and those around him) better.”

This season, Squires turned himself into one of the best defensive backs in the region with six interceptions (returning them for 97 yards), 44 solo tackles and he returned two fumbles for 28. Klayton finished with a pair of defensive TD.

Dale Propst bulked up to 235 pounds through an amped up off-season weight and conditioning program.

Pope recognized Propst as the “Hog of the Year” due to the way he lead the team. Propst had 20 tackles, eight tackles for loss and one fumble recovery. He was a key reason the Dragons accumulated 4,052 yards in total offense.

Tanner Weiler was named the “Loyal and True” winner.

“He’s what our school should be about,” Pope said, extolling the virtues of Weiler’s character on the field.

Weiler was the Dragons’ leader in total tackles, including 54 solo stops. He also had six tackles for loss as Ste. Genevieve surrendered 3,258 yards in 11 games.

Ste. Genevieve outscored foes 446-312, including a season-high 61 points versus Perryville on Oct. 8.

Before the special football awards were handed out, Ste. Genevieve assistant coaches shared their experiences with this year’s senior Class of 2022.

All of the seniors helmets lined the stage.

Postseason awards will be released until all district and conference teams have concluded their seasons.

Ste. Genevieve cheerleader Isabella Neel was honored not once, but twice. Neel earned most valuable cheerleader and best technique on the squad.

The Emeralds had a challenging season with numbers.

Lieutenant Carter was picked as the team’s “dancer of the year.”

Emeralds coach Ashley Crider, junior football player Carter Burr and Neel all won team banners during a drawing at the end of the event.

Scout Team Player of the Year: Will Vaughn

Hog of the Year: Dale Propst

Goon of the Year: Klayton Squires

Dancer of the Year: Lieutenant Carter