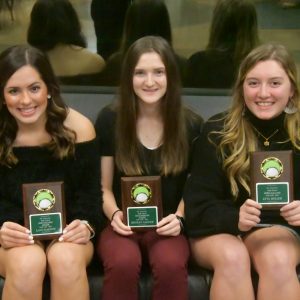 The ceremony, which took place in the R-II Performing Arts Center, lasted 95 minutes.

Once again, the Dragon cross country teams carried on the tradition with Nathan St. Clair and Hollyn Zangaro earning “runner of the year.”

accolades in their respective genders.

“I am grateful for everyone’s support,” Ste. Genevieve head coach Sierra Boyd, who reflected on all the summer miles the Dragons ran — putting in the work to make themselves better.

St. Clair earned all-state, all-district and all-conference honors. He recorded a personal-best time of 16:50.0 for 19th place in the Class 3 state boys’ race at Gans Creek Park in Columbia.

Levi Wiegand also was an all-district and all-conference performer for Ste. Genevieve. Mason Gegg and Wiegand both earned “Heart of the Dragon” while Trey Bloom was most improved.

On the girls’ side, freshman Hollyn Zangaro earned all-district honors and she finished 54th at state (21:11.2).

Dakotah Medows and Kayden Huck also were all-district runners for the Dragons, who finished in a tie for fourth place at the Class 3 District 1 meet in Ironton on Oct. 30. Two freshmen, Sadie Greminger and Sophia Fritsch, won special awards.

Yamnitz finished sixth at the first-ever Dragon Invitational in early September. She posted a scoring average of 51.65 per nine holes and 101.33 (18 holes)

Regean Naeger, who scored a 46 and individual medalist honors during a home match on Oct. 4, was named most improved golfer.

Other standout numbers, the Dragons carded a team score of 419 at their own invitational and 424 at the St. Clair Invitational. Ste. Genevieve twice posted a nine-hole total of 197.

Ava Meyer, Yamnitz and Naeger all earned medalist honors at least once during the season — and the team had a 6-8 varsity match record and 14-33 in tournaments.

First-year golfer Paige Huck opened up the awards night with the invocation.

The Ste. Genevieve volleyball program continued to shine this year, finishing with an 18-10-1 record and the Dragons have played in a district final every year since 2013.

Basler changed the Dragon offense from a 6-2 to a 5-1 midway through the season, and she noted the team had a different line-up in the district championship match versus cross-town foe Valle Catholic — in an attempt to find the right pieces.

Senior Abby Moore was chosen as the team most valuable player because she excels in every aspect — including a 96.4 serving accuracy. She also pounded down 194 kills with a .297 hitting efficiency.

Devyn Basler, who took over the setter’s role this season from the graduated Brittney Kreitler, was named most improved player. She distributed 633 assists.

Maya Watts, who took over at libero for graduated Maci Reynolds, was named defensive most valuable player. Watts scooped 251 digs.

Dru Koetting turned into an explosive front-line player this season, finishing with a team-best 269 kills — more than 60 kills higher from the 2020 season — for offensive MVP honors. Koetting also served up a school-record 44 aces.

A.J. Prudent, who officially signed with East Central Community College in Union on Monday, earned a medal for putting up a school-record 86 solo ace blocks. Tessa Grass was named the “Heart and Hustle” award winner.

The players on the team chose the individual award winners.

Heart of the Dragon: Levi Wiegand and Mason Gegg

Runner of the Year: Hollyn Zangaro

Heart of the Dragon: Sadie Greminger

Spirit of the Game: Etta Heller