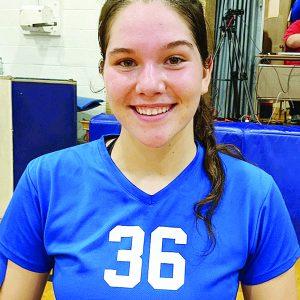 This marks Bertram’s third all-state honor, and first at the Class 3 level.

Bertram dazzled all season long, with 464 kills in 901 attacks for a .424 hitting efficiency. She also recorded a 51.5 kill percentage.

Bertram also had 37 solo ace blocks and 113 ace block assists, with an average of 3.8 blocks per match. She also helped out defensively with 61 digs.

Loida was one of the Warriors most gifted all-around players.

“I was tickled for Sam, it was well-deserved,” Fischer said.

To make the team, a player had to be at least an all-district performer or wild card entry among those schools who advanced to the Final Four in Classes 1-5.

Fischer said academic, all-state honors will not be released until late January when the first semester is finished.

Loida and Bertram were key factors in the Warriors’ finishing with a 32-5-3 record, and third place overall in Class 3.