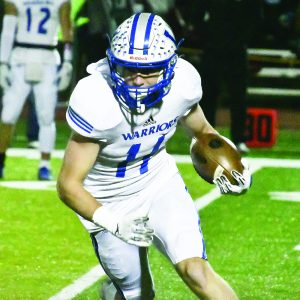 The Valle Catholic High School football team participated in what was termed an “independent” schedule during the 2021 season.

“It is a little larger than a regular all-conference team, due to the fact that 14 schools are represented,” Valle Catholic head coach Judd Naeger said.

could have potentially had five young men make the team if it were not for injuries. Coach Joe Roth did an amazing job with these guys.”

Running back Bryce Giesler and wide receiver Aiden Heberlie were both selected for the first-team offense — with sophomore quarterback Grant Fallert an honorable mention.

“Bryce and Aiden had great seasons,” Naeger noted. “They thrived off how opposing teams decided to defense us. They couldn’t take both of them away. We will certainly miss Aiden, and the sky is the limit for Bryce.”

Valle Catholic — save for the loss to St. Mary’s in the Class 3 District 2 championship — excelled at all levels of defense.

Issac Viox, a sophomore, earned an honorable mention as a defensive lineman.

“Our defense played extremely well this year,” said Naeger, who was pleased with the scant number of yards and points the team allowed this season — especially in the first half. “Coach (Nathan) Gegg did a great job with these guys.”

Naeger said Isaac Viox and Grant Fallert are expected to become even more important contributors in the 2022 season.

The All-Missouri Independent Team was selected based on team wins and class size, Naeger noted.

Next year, the Warriors will be joining the Mississippi Area Football Conference, joining Ste. Genevieve, Park Hills Central, Potosi, Fredericktown and Perryville. The conference will be tough with the Warriors, Rebels and Dragons expecting to field top-notch teams.

The Class 3 District 2 team will be released once St. Mary’s has been eliminated from the playoffs, which remains unlikely until after the forthcoming state championship game. The Herald also awaits the all-MAFC team.