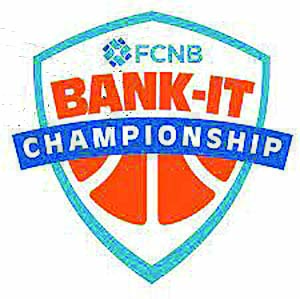 The FCNB Bank-It Challenge begins next week, with Ste. Genevieve as the No. 1 seed. (Submitted logo/Special to the Herald)

And rightfully so considering the Dragons won this tournament a year ago, topping Farmington 61-54 in the championship game.

“We thought it was a good idea to go back to (Sullivan) and have a chance to get two in a row,” said Ste. Genevieve head coach Robert Coleman, who explained the Dragons also had a chance to play in this week’s DeSoto Tournament.

Coleman said he likes that the FCNB Bank-It Challenge puts out an all-tournament team at the end of the event.

Logan Trollinger was the 2020 most valuable player, with Chaytin Lea and Rudy Flieg also on the all-tournament team. Trollinger finished the championship game with 22 points, including three 3-pointers and 7-of-10 from the free-throw line.

Ste. Genevieve, as the top seed, will play St. James in the opening round at 4 p.m. Monday, Nov. 29. Other first-round games are Farmington/Steelville at 5:30 p.m., Capital City/Gateway Legacy at 7 p.m. and Sullivan/Potosi at 8:30 p.m.

“It should be a good tournament with close games,” Davis said in an email to the Herald.

Championship semifinal games will take place on Thursday, Dec. 2, with the consolation semifinals on Tuesday, Nov. 30.

The consolation championship and seventh-place games will be at 4:30 p.m. Friday, Dec. 3.

Admission is $3 for adults and $2 for students. Adults ages 60 years old on up and children five years old and younger are admitted free.