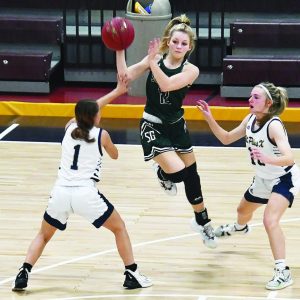 FARMINGTON — The theme for this year’s Ste. Genevieve High School girls’ basketball team could very well be: “Starting over from scratch.”

That much was evident in Saturday’s season-opening loss to St. Pius X in the Second Annual Amped Lifestyle Shootout at the Centene. St. Paul Lutheran School adminstered this one-day basketball extravaganza.

“It’s a reloading year, and we are taking every practice and game as a chance to get better,” Ste. Genevieve head coach Jordanna Walk-Robison said. “We are very young, and don’t have any varsity game experience. They are going to get better the more they play. It’s all a part of the process, and I appreciate their hard work.”
The Dragons stand at 0-1 heading into today’s game at Herculaneum, with tip-off set for 4 p.m.

Ste. Genevieve had trouble breaking St. Pius’ full-court press, and the Lancers built a 17-0 with 3:09 remaining in the first quarter.

Regean Naeger scored Ste. Genevieve’s first points of the season on a 3-pointer from the right wing. The Dragons were down 19-6 at the end of one and 25-12 at intermission. Both teams scored just six points in the second quarter.

“I think we finally settled in, and first-game jitters are hopefully out of the way now,” Walk-Robison said.

But, the Lancers again built their lead, and the final differential of 18 points was the largest in the contest.

Both Naeger and Byington tallied 11 points to pace the Dragons.