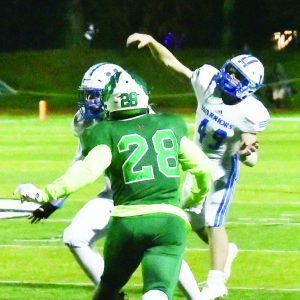 Valle Catholic High School’s Class of 2022 produced some fine memories during the past four years.

“This group of seniors has been awesome to work with,” Valle Catholic head coach Judd Naeger said. “They have gone 26-1 in the regular season the last three years, won a state championship, and stayed ranked in Class 3 for every week they have played, and won our first Class 3 district game.”

“I have heard from many underclassmen’s parents how much they mean to our younger players,” Naeger said. “They will all be successful in life beyond football.”

In Friday’s loss to St. Mary’s, two seniors had a hand in Valle Catholic’s only score of the game.

On a halfback option, Bieser threw a wobbly sinker to Heberlie, who made a spectacular catch surrounded by Donovan McIntosh, De’Shawn Fuller and Chase Hendricks.

This was the high moment of the game for Valle Catholic, with St. Mary’s eliminating the Warriors from the playoffs for the second straight season.

Hendricks, who scored four receiving TD, was in attendance at Faurot Field in Columbia this past Saturday — watching the Tigers down South Carolina, 31-28. He has received six offers, including one from Mizzou.

McIntosh has received offers from many NCAA Division I schools, but he’s looking mainly at the University of Arkansas plus Kansas.

So, these are the kinds of athletes Valle Catholic faced not once — but twice — during the past two years.

Valle Catholic had a great season, and these Warriors should hold their heads high.

This year, Valle Catholic soundly defeated St. Dominic in O’Fallon, what was at the time a battle between teams ranked in Class 3 and Class 4, respectively.

Quarterback Chase Fallert was lost for five games with a significant yet unspecified injury. Sam Drury was hurt in the Sept. 10 game at St. Vincent in Perryville.

Both Drury and Fallert are juniors, so they’ll be back and provide considerable contributions for the forthcoming 2022 campaign.

“Our guys overcame adversity all season,” Naeger noted. “Sam was a leader for us on the field in so many ways. This group just kept playing, and many, many guys stepped up to help us overcome so much.”

Grant Fallert, Chase’s cousin, took over as Valle Catholic’s quarterback and showed much promise as a sophomore.

Now back to the seniors, Bieser finished the season with 136 tackle points, four quarterback sacks, 23 tackles for losses, four fumble recoveries and 15 hurries.

Offensive and defensive lineman Charlie Friedman had a memorable season with both a 17-yard interception return for a TD and a punt block score.