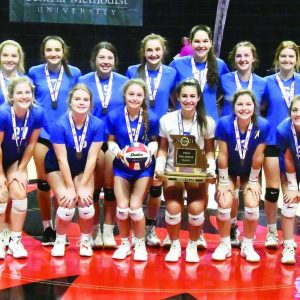 The Missouri High School Volleyball Coaches Association (MHSVCA) released all-district honors during the middle of last week, and as expected, the Warriors were highly decorated.

Head coach Nancy Fischer was especially pleased to see Valle Catholic rank so well in all-district awards — especially since these were Class 3 accolades.

Bertram pounded down 464 kills with a .424 hitting efficiency, one of the main reasons why the Warriors compiled a 32-5-3 record and finished third overall in Class 3.

“Ella’s had a strong skill set since she was a freshman,” Fischer said. “She has honed them since she was a sophomore. She’s a good consistent hitter, and formidable blocker.”

Bertram also finished with a combined total of 150 ace blocks and block assists. During the season, Ella crossed the 1,000-kill threshold for a career. She remains searching for a college to continue her career past Valle Catholic.

As for Loida, Fischer said, “Sam is a really great competitor, and an outstanding setter.”

Loida made the transition from opposite player to setter during her junior season. Fischer said Sam had a “willingness to learn, and turned into a leader.”

Loida earned her 2,000th career assist in the Class 3 semifinal match versus Blair Oaks. Sam had 865 of those assists this season to go with240 digs and 42 ace serves.

Weibrecht, who also aspires to play college volleyball somewhere, also was a force in the middle for the Warriors. She had 264 kills and a .234 hitting efficiency as well as 78 total blocks.

Fischer said Weibrecht was constantly asking for extra time after practice to sharpen her blocking skills.

Blum controlled the back row, whether she was playing libero or defensive specialist.

Rachel finished with 283 digs. She also was perhaps the best server in the region, leading the Warriors in both service points (303) and aces (67) and 91.5 percent accuracy.

This was a memorable season for the Weiler girls, the sister act who played together one last time on the court in 2021. Both of them were named second-team, all-district performers.

Ade Weiler transformed herself into a top-flight outside hitter with 126 kills to go with 43 total blocks and 332 digs. The sisters combined for 84 ace serves, too.

Fischer said the Weiler sisters made each other into better players, which doesn’t happen for siblings from time to time.