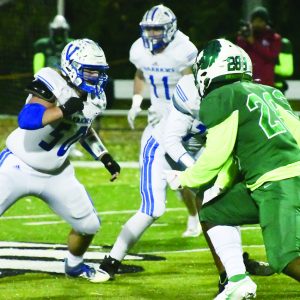 However, the cold wind of reality soon swept over Kresko-Miller Field as St. Mary’s bolted to a 21-0 lead with 2:39 remaining in the first quarter.

The Dragons were well on their way to eliminating the Warriors from the playoffs for the second consecutive season — this year winning 55-7.

Valle Catholic finished with a 10-1 record as a ranked team in Associated Press polling every week this season. The Warriors advanced one round further in the playoffs in 2021.

For Valle Catholic, it wasn’t without trying, which included a first-half onside kick attempt and a trick play that resulted in the Warriors’ lone score.

“Defensively, we were trying to be aggressive versus the run and keep their receivers in front of us,” Valle Catholic head coach Judd Naeger said.

“We were successful versus their running game, but unsuccessful in keeping them in front of us,” Naeger continued. “Their quarterback was incredibly accurate, and their wide receivers were too much.” 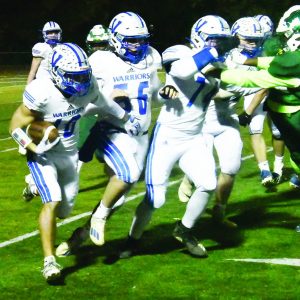 Valle Catholic’s Bryce Giesler (10) tries to find room to run around the blocking of Jackson Fowler (56) and Charlie Friedman (74) during the first half of Friday’s Class 3 District 2 championship game versus St. Mary’s at Kresko-Miller Field in St. Louis. Like last season’s game, Valle Catholic closed within 14 points on a 30-yard halfback option from Josh Bieser to Aiden Heberlie.

“Offensively, we were trying to window dress some of the concepts that worked against St. Mary’s last year,” Naeger explained. “We also needed to shorten the game, so shifting allowed us to use some time off the clock.”

The Warriors had success, at times, but St. Mary’s was too big and too athletic — turning a prolific Valle Catholic offense into an inconsistent one. The Warriors finished with just 170 yards, 271 below their season average.

Bryce Giesler was held to 31 yards. Grant Fallert rushed for 47 yards and threw for 44 more.

Heberlie caught 38 yards in passes, including that trick score.

Meanwhile Spann, who attended the Blue/Gray football combine, was a spotless 12-of-12 passing for 358 yards and six TD. Hendricks totaled 181 yards in receptions and Coleman 145.

Teammate Jamal Roberts, who has received an offer from Arizona State and visited Kansas State last weekend, scored from eight yards away late in the third quarter, and the clock entered turbo mode.

And St. Mary’s, who defeated defending Kentucky Class 6A Louisville Trinity and barely lost to Illinois Class 8A Naperville Neuqua Valley, celebrated on the field while Valle Schools president Fr. Edward Nemeth and Naeger both fondly reflected on what a wonderful season it truly was for Valle Catholic.